Where are they now? Part 1: Zeller, Telfair, Haddadi, Redd, Warrick

Ever wondered what happened to your favorite Phoenix Suns bench warmer or marginal miracle player? This series of articles will revisit some of Suns fans' beloved bench warmers from over the years and track their careers.

Share All sharing options for: Where are they now? Part 1: Zeller, Telfair, Haddadi, Redd, Warrick

Sports teams always feature bench-warmers - guys who never see much playing time unless there is an injury or a blowout.  These guys are almost always fan favorites, because the perception is they're the closest thing to Joe Blows on a team.

The Suns are no different.  Over the years, many marginal NBA players have graced the Suns' roster, wowing fans with their towel waving, their vociferous vocal support, or their absolutely dominating stoicism on the bench.

Oftentimes, once these players have finished up their contract, their time in the NBA is up.  Marginal and borderline players don't usually have long careers - maybe 4-5 years - unless they have a difficult to replicate skill-set or body characteristic (you can't teach 7'4).

Once these players are out of the local eye, we tend to lose track of them.  They aren't like old soldiers - they don't just fade away.  They often have long careers after their time with the Suns, and even after their time in the NBA.

Who could forget the loveable Luke Zeller, the 6'11 Center out of Notre Dame who was emblematic of the Suns' organizational infatuation with the 'lesser brother' (in this case, Luke is the lesser of three brothers)?

Luke Zeller had been something of a journeyman before signing with the Suns in the summer of 2012.  A bench player at Notre Dame, Zeller averaged only 15 minutes per game and just under 5 points.  Going undrafted in 2009, Zeller played first in Japan in 2009, then in Lithuania, before spending a few seasons in the D-League.

In 58 cumulative minutes for the Suns over 16 games, Zeller produced 19 points, 10 rebounds and 3 assists.  He was waived by the Suns in February, 2013 in order to make room for Marcus Morris on the roster.

After being waived by the Suns, Zeller laid low until the off-season.  Zeller was among 24 marginal players invited to a Jazz mini-camp in the summer of 2013, but failed to stand out.  He remained a free agent until late December of last year, when he was picked up by the Austin Toros.

Zeller had a season to forget in Austin, playing in 36 games for the Toros and averaging just 5 points and 4 boards on under 40% shooting in just under 20 minutes per game.

Outside of the NBA, Zeller has taken on the role of President of DistinXion, a Zeller Family Program, which provides basketball centered community activities featuring the three Zeller brothers as well as the Zeller parents.

Sebastian Telfair had a long, if not distinguished career before joining the Suns in 2011.  Drafted out of high school in 2004 by the Trail Blazers, Telfair played for 6 different teams between 2004 and 2011.

Telfair had a career year for the Suns in 2011-12, putting up arguably his most efficient offensive season.  His play declined only slightly in 2012-13, but he wasn't considered part of the long term plans for the franchise, and was traded to the Toronto Raptors for a 2nd round pick and future Suns great Hamed Haddadi.

Telfair did not do much during his time in Toronto.  He played only 13 games for the team, and saw his efficiency and touch disappear.  Perhaps unsurprisingly, he was not retained by Toronto.

Telfair was connected with a number of teams during the 2013 offseason, including the Celtics, Spurs and Lakers. In the end, however, Telfair and his agent decided that the best opportunity lay in playing overseas.  His agent, Andy Miller, told Yahoo Sports "We wanted to make a move from a position of control, and allow Sebastian a chance to run a team this season before coming back [to the NBA]."

Telfair ended up signing with Tianjin in the CBA for a year and had a confidence building season.  Telfair averaged 26 points, 6 assists, 4.5 rebounds and 2 steals per game.  In the CBA playoffs, Telfair put up a 58 point game (in a losing effort), which is a record for the CBA playoffs.

Following the CBA season, Telfair made the decision to come back to the NBA, and signed on with the Oklahoma City Thunder to be the Derek Fisher replacement, ostensibly.  Interestingly, Telfair reportedly turned down a 2 year, $7 million dollar deal with a team in the CBA, in order to return to the states and pursue an NBA championship.

Hamed Haddadi was a bear of a man for the Suns in his brief, glorious run with the team  He was acquired in the trade that sent Sebastian Telfair to Toronto, mainly as cap ballast, in 2013 and played 17 games for the Suns.

Haddadi had a pretty long run for an undrafted, relatively unskilled player (at least by popular perception) out of Iran. He was active in the NBA from 2008 to 2013, the vast majority of that time as the 3rd center for the Memphis Grizzlies.  This was perhaps his greatest achievement in that time period.

With the Suns, Haddadi was his usual likeable self, but like Telfair he wasn't part of the team's long term plans.  He was cut, despite still being owed over $300,000, after his lone season with the team.

After being waived by the Suns, Haddadi focused his efforts on the Iranian national team.  In the 2013 Asia Basket tournament, Haddadi was dominant, averaging almost 19 points per game, 10 rebounds per game and almost 2 blocks per game, in the process leading the team to a 9-0 finish and a gold medal.  He was named the tournament MVP.

During the summer of 2013, Haddadi signed with Foolad Mahan Isfahan, of the Iranian Basketball Super League. He helped lead the team to its first ever Asian Champions Cup victory that year with his commanding presence on the glass.

Following the completion of the Iranian Basketball Super League season, Haddadi signed with the Sichuan Blue Whales for the 2013-14 season.  For the season (he played 26 games), Haddadi averaged 14 points, 13 rebounds, 3 assists, 1 steal and 2 blocks per game.

Haddadi signed on to play this spring/summer with Mahram Tehran, one of the better teams in the Iranian Super League and Asia more generally.  He will also be representing Iran at the FIBA World Championships in Spain at the end of this month.

Redd proved to be one of the best stories in the NBA, as well as one of the most sad.  A mid-2nd round pick of the Milwaukee Bucks out of Ohio State, Redd quickly became one of the best scorers in the NBA.  For 6 straight seasons (2003-04 to 2008-09) Redd averaged over 20 points per game with a highly efficient TS% of nearly 56% and an average WS/48 of .135.   He was also a member of the 2008 Olympic gold medal winning Redeem Team.

The tragedy for Redd was that he could never stay healthy.  After the 05-06 season (arguably his best: 25 points, 3 assists, 4 rebounds and 1 steal per game) Redd played 70 games or more only once due to lingering, long term knee damage.  This decline in his health is what led to Redd leaving the Bucks for the hallowed halls of the Phoenix Suns' training room.

Redd's time with the Suns was uneventful, though he did manage to play in almost as many games as the previous 3 seasons combined.  He put up respectable numbers for a bench player, but it was apparent his knees were shot, and his 3 point shot never got back to the highly efficient point it had always been at before.

Redd left the Suns after one season, though the team apparently considered bringing him back for the 2012-13 campaign.  In the 2012 off-season, and well into the season, Redd was tied to rumors from a number of teams, especially after he said his time with the Suns had left him better than at any point in recent memory.  In 2012, he was tied to the Bulls, the Cavs, the Thunder and a handful of others.  In 2013, after a full year removed from the game, Redd decided to retire, turning down a camp invite from the eventual NBA Champion San Antonio Spurs.

Early in the season, Redd returned to Milwaukee to formalize his retirement and thank the fans of Milwaukee. 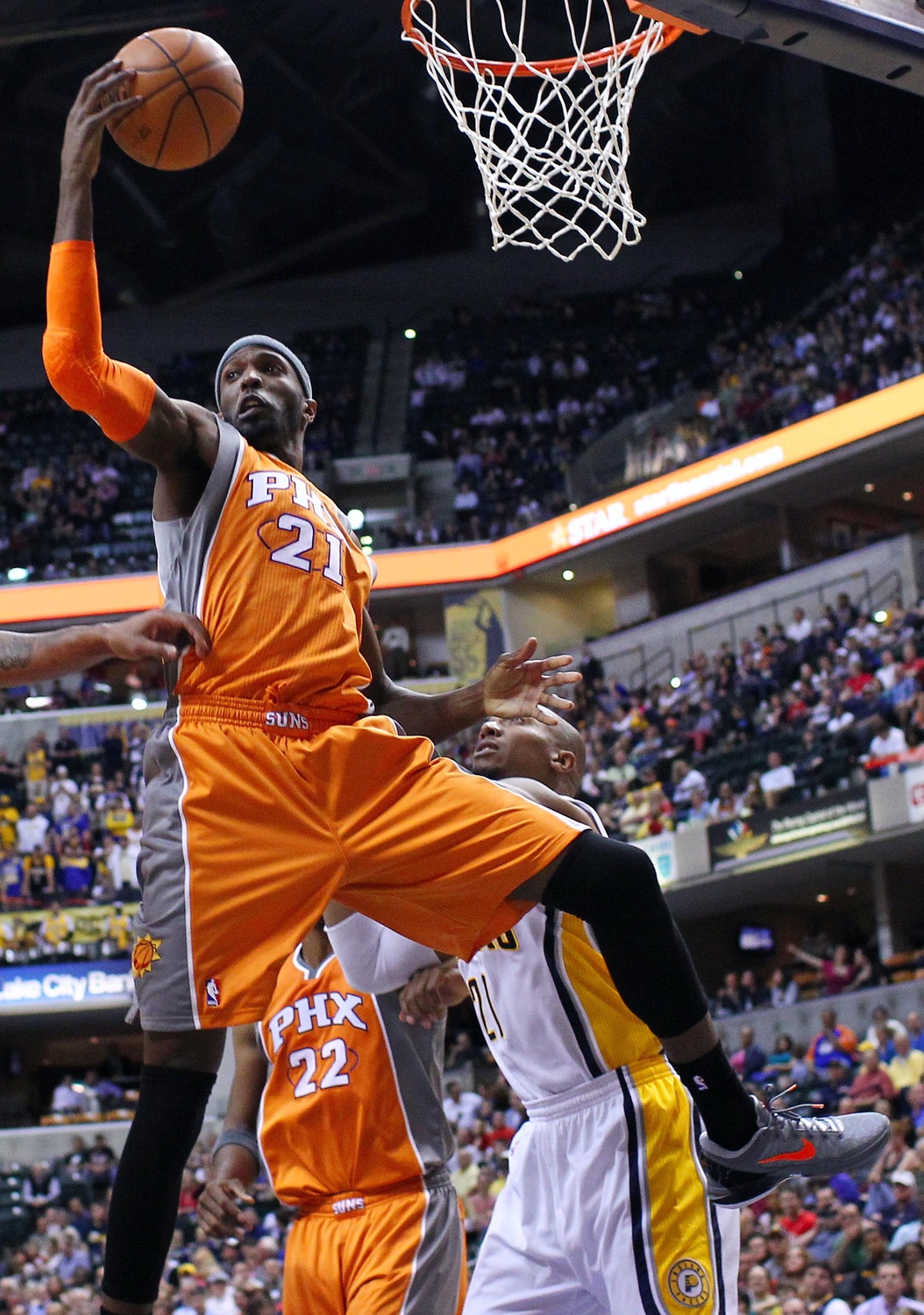 Hakim Warrick was a divisive figure among Suns fans (though, probably not as much so as Josh Childress). Warrick was a mid-first round pick of the Grizzlies, coming out of Syracuse.  After finishing his rookie contract with the Grizzlies, Warrick floated around for a bit, playing with the Bucks and Bulls in 2009-10 before landing on the Suns in 2010-11 as part of Robert Sarver's self-indulgent spending binge post-Amar'e.

Warrick spent two seasons with the Suns, and was actually pretty respectable in his first, putting up a 16.5 PER and averaging 8 points and 4 boards in 17 minutes a game.  The wheels fell off the next season, however, and Warrick only appeared in 35 games.  The Suns would ship Warrick and Robin Lopez out after the season in exchange for Wesley Johnson and a 1st round pick.

Warrick's career continued to go downhill after being traded by the Suns.  He appeared in just one game with the Hornets in 2012-13, before being traded to the Bobcats for Matt Carroll (eek...), and then being traded again, this time to Orlando in exchange for Josh McRoberts, and being promptly waived by the Magic.

In the 2013 offseason, Warrick wasn't firmly connected to any teams in the rumor mills, somewhat surprising considering he was one year removed from a solid season and was still only 30 years old.  After not being invited to any camps, Warrick took an early season tryout in China.  He ended up playing for the Liaoning Dinosaurs, where he averaged 21 points, 9 rebounds, and 1 assist, steal and block per game over 22 games.

While he expressed interest in returning to the NBA this season, he has as of yet been unconnected to any teams.