Assuming the Suns focus on keeping Goran Dragic next summer, they might be better off locking up the Morris brothers for about the same price they have offered Eric Bledsoe.

The "Eric Bledsoe situation" has made for a strange and weird summer in the valley. I have never seen an NBA player, at least who came through Phoenix, who gave the entire league the silent treatment in the very summer he's supposed to garner his life-changing contract.

--Spears, on whether Bledsoe deserves a max contract

Bledsoe has lost nearly all of his goodwill this summer in the NBA. No one knows what he would settle for, other than $84 million over 5 years. Only one team can even give him that contract - the Phoenix Suns - and they don't want to. Committing an average of $18 million per year to a guy with Bledsoe's pedigree is frivolous. Doing so without any competition would be madness.

I have been an ardent supporter of the business side of the game, and that Bledsoe's summer actions have had no bearing on the Suns as a team because it was the offseason.

Now, we are less than two weeks from training camp and Bledsoe is positioning himself to become a real distraction. If Bledsoe decides to wait until October 1 to sign his qualifying offer ($3.73 million) to play one more season with the Suns and then become unrestricted next summer, he will be able to skip 'Media Day' on September 29 and the opening days of training camp on September 30 and October 1. Training camp itself is only 4 days long, so to miss up to 2 of those days is completely unnecessary. But that's Bledsoe prerogative.

Don't expect the Suns to trade Bledsoe in the coming days. There have been zero leaks on other teams' heavy interest in Bledsoe, and zero mentions of Bledsoe even accepting a contract offer from another team since they cannot offer the whole $84 million he wants. They all want to see how he plays this year, and then just pick him up at that dreaded "market value" next summer without giving assets back to the Suns in the process.

So Bledsoe will be a Phoenix Sun for the next season. Which isn't really a bad thing on the court. He may be a distraction now, but once the games start up his teammates will focus on the court rather than the bank account. He's shown a clear drive when playing that he never shows off the court. He's been a model - if quiet - teammate and he helped the Suns win a lot of games. Expect that to happen again. The Suns are better with Bledsoe.

But don't expect him to have a change of heart and want to stay for less than max next summer. The Suns will have a handful of players on the market, and Bledsoe will not likely be #1 on that list.

With Bledsoe becoming an unrestricted free agent next summer, the Suns will be totally flexible next summer. Talk about a true "fungible" roster.

Only a handful of players will be under guaranteed contract for 2015-16 if Bledsoe is a free agent and no one is extended. 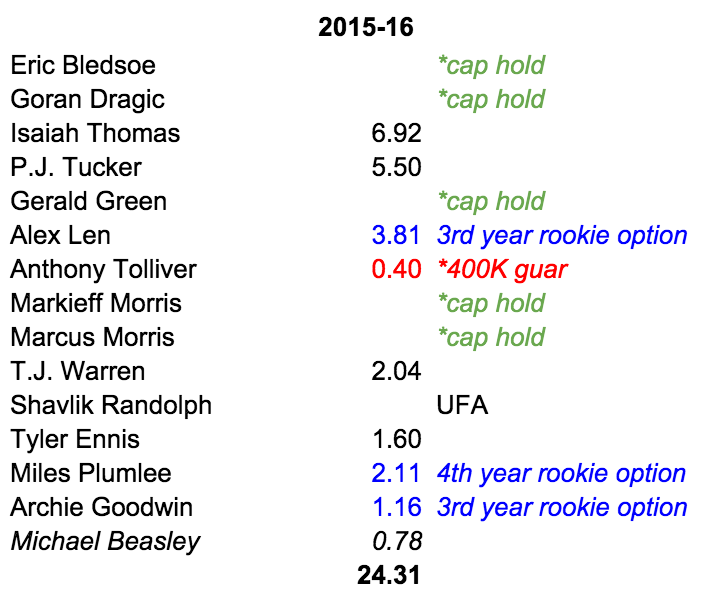 The upside is the fungibility. The downside is that there are only two true rotation players on that list of guaranteed 2015-16 contracts, and neither of them projects to be a starter in 2014-15. Sure, some of the kids may emerge but at the moment that's a bare shelf for 2015-16.

Now, let's look at the cap holds - the money reserved against the cap to retain "Bird Rights" on the free agents. The "guaranteed" number assumes the Suns will decide this fall to pick up the third year options on Archie Goodwin and Alex Len. 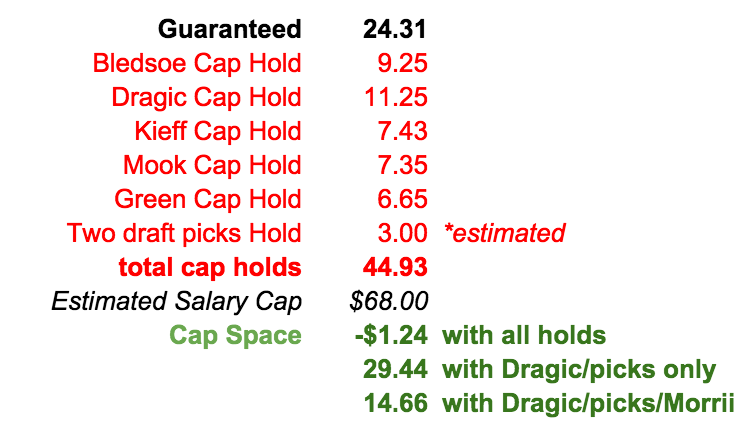 This is where next summer gets really interesting, crazy, tricky... whatever you want to call it. Going into the summer, nearly every major rotation player will be a free agent, leaving the Suns with just youngsters led by Isaiah Thomas and P.J. Tucker.

The Suns could renounce all of their free agents to create as much as $29 million in cap space to buy new players. But that $29 million would have to buy at least 4-5 rotation players, including a couple of stars.

Or, the Suns could keep all their own free agents, which could limit the ceiling of the team because the team still lacks a championship nucleus.

Or, the Suns could pick and choose who to keep and who to let go. The timing of those moves will be very, very tricky.

But with the cap holds figured in, the Suns cannot spend a dime in free agency on July 1 without letting someone go. That means the Suns will have to make some tough choices. If they target all of their own free agents, then they will miss out on the best free agents available from other teams (including Marc Gasol and Paul Millsap, for example).

The Suns would be straddling the fence of negotiating with their own guys AND other guys at once, while their own guys are negotiating with other teams, and then trying to work the signings and renouncements as needed. As we saw this summer with Chandler Parsons and others, incumbents don't always take kindly to not being a team's sole focus in free agency.

Another option - keep the Morrii

After the "summer of silence", it would be nice to hear some players profess their desire to stay in Phoenix. Goran Dragic has already hinted that's the case for him. He would prefer to stay, and the Suns want him to stay (though at a price commensurate with the market).

Flying under the radar is that Markieff Morris and Marcus Morris want to stay too. Though they have deep roots in the Philadelphia area, the brothers have spent the last two summers in Phoenix focused on bettering themselves.

And, as recently as March 2014 they professed a strong desire to stay together. In Phoenix.

"We're hoping that we can stay together because we play better together," Marcus said. "Hopefully, a team takes a chance on that. Hopefully, it's the Suns. We like being here. The more successful we are, the better our chances of staying are.

"We feed well off each other. The chemistry we bring is major for any team because you have two people who have lived together, played together and done everything together. We've always got that in-sync part of the game."

"We think about it a lot," Markieff said. "We said in the beginning that if we ever get together, we're going to stay together. We do our best to compete and show how good we are together.

Note that neither said they would take a pay cut to stay together. Rumor has it they said so in college, but that was before they were making the big bucks.

But even putting the money aside, you have to consider the roster and the future. Are Markieff Morris and Marcus Morris worth keeping for several years at, say, $14 million per year between them? What is that collective number that makes you nod your head versus shake it?

Many think the Suns will want to upgrade the power forward position next summer in order to take that next step in the playoffs, but if you're spending $14+ million per year on the Morrii, have you already put your eggs in that basket?

A new factor in all of this is the sure-to-rise salary cap. Rumors have already started the the TV deals will double in value in two seasons, which will make the salary cap skyrocket because the players and owners split all that money. What is a $63 million cap now could be $80 in two years, and even higher than that in four years.

The average NBA player salary could easily rise from today's $5.85 million (MLE) to as high as $9-10 million.

In that world, are two strong rotation players worth $14 million per year between them?

With the fiasco of the Bledsoe contract, the Suns might just want to lock up a couple of devoted rotation players right now rather than wait out the open market next summer. The Morris brothers have been in Phoenix all summer. The Suns know their dedication. They know their loyalty. The twins are not NBA stars yet, but they are good for the team and for the valley.

As you can see on the salary cap snapshot above, committing up to $14 million to the Morrii in extensions (which is likely higher than the Suns need to go) would still leave the Suns with a lot to spend next summer.

With the Morrii locked up, the Suns could recreate this summer's plan by having a mini-max salary slot open for a free agent before re-signing Dragic to a number high than his cap hold.

Let's say, for example, the Suns really want Klay Thompson to replace Eric Bledsoe. They could create the space, with a minor move, to offer Klay a deal as high as mini-max, then re-sign Goran Dragic afterward and have a lineup of Dragic, Thompson, Tucker/Warren, Morris/Morris and Plumlee/Len, with Isaiah Thomas as the supersub point guard off the bench. That's not necessarily a championship team, but I'm just illustrating swapping Bledsoe for Thompson.

The Suns will have options. But if they don't lock up the Morrii, they may have too many options (and too much risk) with only two major rotation players under contract on July 1, 2015.