Phoenix Suns will not trade down from Bledsoe, require All-Star worthy player in return

The Minnesota Timberwolves rumor of wanting Eric Bledsoe quickly fizzled yesterday like a balloon with the hole in it. The Phoenix Suns don't want the junk that Minnesota was offering in return for a near All-Star.

Share All sharing options for: Phoenix Suns will not trade down from Bledsoe, require All-Star worthy player in return

On September 19, something new came to Phoenix that's been anticipated for weeks if not months. I personally was excited, because it was a "trade up" I hadn't seen coming.

Yes, folks, I'm talking about my new iPhone 6. Not the 6+, mind you, because real Suns fans appreciate star power in smaller packages. Our best players in Suns history have been on the small side for their position, so I continued that trend by taking the smaller of the iPhone 6's.

Oh, you thought I was talking about an Eric Bledsoe trade? Nah. There is NO Eric Bledsoe trade in the works. At least not to Minnesota, unless they want to include 2014 #1 overall draft pick Andrew Wiggins in the conversation as a starting point.

First of all, the reporting on this interest from Minnesota yesterday was shoddy. Minny has no cap space (okay, maybe $1.5 million) with which to make any offers to Bledsoe as a restricted free agent. Yet a reporter said an offer was made. That is impossible. Minny is capped out. Think about that for a minute. One of the worst teams in the league that's now leaning heavily on youth is totally capped out, while a team on the cusp of the playoffs (the Suns) have lots of room.

So, Minnesota cannot make an RFA offer to Bledsoe. What reportedly happened is that Flip Saunders, the Wolves President AND coach, allowed Bledsoe's agent to float a rumor to LeBron's long time beat reporter - Brian Windhorst - that they would make a mini-max offer to Bledsoe if they could. It's the relationships involved that make this whole thing stink.

Bledsoe's representatives with Klutch Sports, Rich Paul and Mark Termini, were unable to find a consequential offer sheet to force the Suns into matching a deal. Timberwolves president and coach Flip Saunders has been represented by Termini for much of his coaching career.

Flip has been Termini's client. Termini is Rich Paul's partner. Rich Paul is Bledsoe's agent and wants to prove that Bledsoe is a max player. Paul is also LeBron James' agent. James' long time beat reporter is Brian Windhorst. Windhorst covered James in Cleveland, then followed him to Miami and now followed him back to Cleveland. Windhorst broke the story in a shoddy way, with a title that still shines on ESPN's home page: "Wolves offer max deal"

The Wolves are offering Bledsoe the four-year, $63 million maximum level contract that he has been seeking, sources said, but because of cap restrictions, the only way he can join the team as currently constructed is through a sign-and-trade deal. Bledsoe and the Suns have been in a stalemate all summer after the team offered him a four-year, $48 million deal in July.

Flip has no money to spend outright, so he has nothing to lose by allowing this rumor to float. It helps him in negotiations with Ricky Rubio (that the team is willing to go in a different direction if need be) and helps him in the community to give the impression that he's doing everything he can to improve the team.

Flip, I'm sure, made a courtesy call to the Suns and offered his worst contracts and Rubio in exchange for Bledsoe. Every team in the NBA would swap a handful of bad contracts for a near All-Star.

The Suns hung up. The rumor was floated anyway. And it died as quickly as it started. No, the Suns don't want any combination of Rubio, Barea, Brewer and Kevin Martin for Bledsoe. There's a reason those guys are on the block, and they are a big reason the Wolves are projected at the bottom of the West.

Trading up, not down

I know you would like to quibble with the logic I used, and of course you are free to do so.

But I'm telling you right now I have it on good authority that the Suns would only consider sign-and-trade offers for Eric Bledsoe that net them an equal or better individual player in return. And I've been saying the same all summer.

"No way they take back bad contracts. The Suns will want a booty worthy of Bledsoe."

"Certainly, the Suns are in win-now mode, so any trade would be for a better player not a worse one. The Suns are no longer in the business of sending out the best player in the deal."

"The most important thing here is that the Suns need to "trade up" with Bledsoe. There's no dumping him for prospects and draft picks. The Suns still have Bogdan Bogdanovic waiting overseas, four first rounders not old enough to drink alcohol on the roster and four more first round picks in the next two years coming to the team. The Suns don't need future draft picks."

I can see the Suns considering a star-quality 2014 draft pick in return to start the conversation (Julius Randle, Wiggins, etc) but otherwise they only will take a veteran back that's at least as good as Eric Bledsoe.

Don't think of trades in way of aggregation. Don't think the Suns want a many-for-one trade involving Bledsoe. The Suns are in the business of getting better as a result of trades, not worse. To trade Bledsoe for leftovers is a step back, considering the roster as already constructed.

Bledsoe has more value to the Suns than any trade offer proposed to date.

The value of Bledsoe

Some fans have forgotten how valuable Eric Bledsoe is to the Phoenix Suns. If the Suns want to make the playoffs in 2014-15, and they really do, then a player of Bledsoe's caliber is needed.

More than his underrated, and sometimes unstoppable offense, he is a powerhouse on defense in a way that no other Phoenix Sun provided last year.

While the Suns offense was a little worse with Bledsoe on the court, their defense was top notch with him as the head of the snake. No other regular rotation player had as much impact on the defensive end of the floor, according to basketball-reference.com.

Compare that to Goran Dragic and Isaiah Thomas. 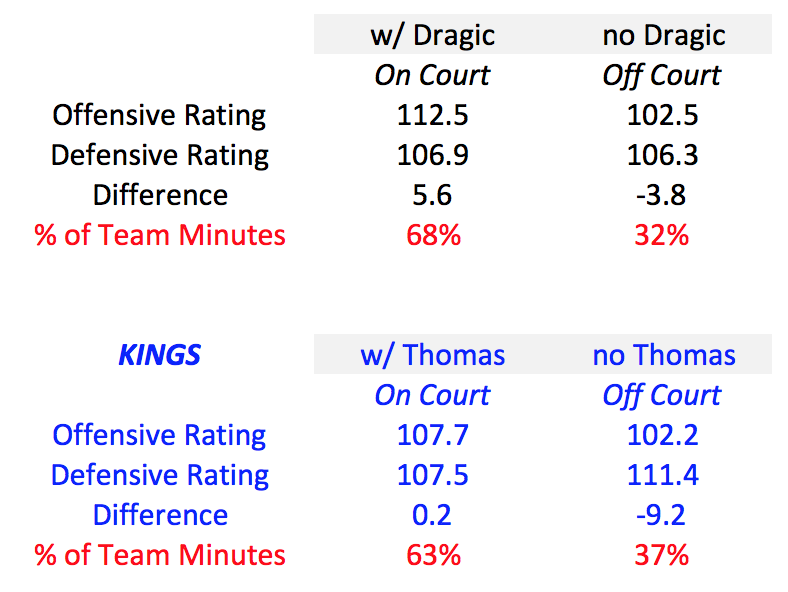 The Suns were much better offensively with Dragic, and the net difference was better than Bledsoe's. But the defense applied by Bledsoe makes a huge difference on the bottom line of the game. And with Thomas, again the offense is there but the defense is lacking. Both Dragic and Thomas are players who can win you games. Clearly, they can. But pairing them with a defensive player is more than a little helpful.

Take a look at how the Suns fared last season when Bledsoe was healthy versus when he was out of the lineup. For simplicity purposes, I only delineated by the huge chunk of games missed in 2013-14 due to Bledsoe's knee injuries. I did not split the record by the handful of other games each of Bledsoe and Dragic missed.

You can see that there is a direct correlation between the Suns' team win-loss record and their net rating on offense and defense.

More than anything, this table illustrates that the combination of Goran Dragic and Eric Bledsoe is lethal. The Suns are so much better when they can combine an offensive force (Dragic) with a defensive force (Bledsoe) who can also provide some of what the other does as well.

The Suns know this. They know that their best chance to make the playoffs in 2014-15 is to have at least two All-Star worthy players in their lineup. Of course the Suns have had conversations with other teams to trade Bledsoe, but they do not want to reduce their number of All-Star worthy players in the process. Remember the 2012-13 season when the Suns had a stable of okay players? They turned that into a 25-54 record. And last season, when Goran Dragic was out there without Bledsoe, the Suns were barely above .500.

Whether you agree with the logic or not, this is where we stand. The Suns have shown no interest in trading down this summer from Bledsoe. They only want to trade up.

A year on the QO

No one really knows how Bledsoe and his teammates will handle a year with him on the qualifying offer. It all depends on Bledsoe himself. Bledsoe has until October 1 decide on a qualifying offer or a long-term contract. After that, it's just basketball.

Don't forget that Bledsoe played on a final-year contract all last season and his teammates loved him. No one knew exactly what he would do this summer, but they didn't care about that last year. Bledsoe was just Bledsoe. Quiet by nature, but highly determined from tip off to closing buzzer. He's a mercenary. So there's no reason to think he won't be "just fine" next season on a one-year deal.

If the Suns believe that - that Bledsoe will be a locker room "neutral" this season no matter what happens - then you stay on your position and wait out the year. At least next summer, it will all be over sooner.

The Suns would still rather just sign Bledsoe to a long-term contract. They started with 4/48. Until yesterday, Bledsoe's camp would not consider anything less than 5/84.

It is still true that any Suns contract north of $54 million over 4 years is the most Bledsoe can reasonably make in those seasons. The Suns want to sit down to negotiate. If Bledsoe's camp is finally ready to do so, we might just have a happy ending after all.

We already know Goran Dragic will get paid. Isaiah Thomas was already paid. If the cap rises as expected, $15 million year to Bledsoe is doable. $37 million per year to the three of them is doable too, as long as the cap is more than $70 million. They are 40% of your minutes, so it's okay to spend 40-50% of the cap on them, especially when two are All-Star worth and the third is Sixth Man of the year worthy.

I wrote the other day that the Suns might be better served to spend the Bledsoe money on the Morris twins, and that is still true if Bledsoe takes the QO and wants to leave next summer. I wrote a few weeks ago that signing of Thomas and drafting of Ennis and courting of Zoran Dragic (to keep Goran next summer) are all part of the plan to survive if Bledsoe leaves.

But the Suns are better off, talent-wise, keeping Bledsoe AND Dragic AND Thomas AND the Morrii. They can do so if Bledsoe signs in the next week.