The Phoenix Suns grand plan, much to the head-scratching of many, is to keep their three guards - Eric Bledsoe, Goran Dragic and Isaiah Thomas - long term. Here's how they will do just that.

After signing Eric Bledsoe to a 5 year, $70 million contract in the same summer they gave a 4-year, $27 million contract to Isaiah Thomas, the Phoenix Suns have continued to heavily invest in their very successful back court tandem.

Make no mistake. Goran Dragic is in the team's plans as a starter for a very long time. When Goran Dragic and Bledsoe started together last year, the Suns were 23-11, so the Suns very much want to keep Goran Dragic and Eric Bledsoe together. And because the two made 44 starts together, they purposefully added Isaiah Thomas as a highly paid third guard to ensure the guard rotation is fresh and strong all season long.

Each of those three guards averaged at least 17.7 points and 5.5 assists per game a year ago. Thomas won't make those raw numbers again, barring injury to one of the starters, but he will be a super-sub off the bench and one of the league's best insurance policies.

This season, the Suns will be spending $31.23 million on their top 4 guards, including Gerald Green who put up more than 16 points per game last season himself in a spot-starter role. That is nearly 50% of the $63 million salary cap going to 40% of the team's minutes. Not a bad ratio, considering the team's three highest paid players - and four of the top five - are in that number.

You have to stop considering three of those guys as point guards, and start realizing the Suns do believe this is their back court of the future. Some day, Green may be replaced by a younger, cheaper model (Archie Goodwin, Tyler Ennis, or another player), but the trio of Bledsoe, Dragic and Thomas are truly the team's long term plan to cover most of the minutes at the two guard positions.

If nearly no one blinks at Golden State's Klay Thompson getting a big contract next summer to stay next to Stephen Curry, then you can't blink at the Suns keeping their guard tandem together either.

"We have every intention of keeping Goran in a Suns uniform as long as possible. We know he loves Phoenix. There's plenty of money for Goran next year or when it comes up. We fully anticipate taking care of him."

--McDonough to Paul Coro of azcentral.com on Sept 24

Goran Dragic, who makes $7.5 million this season (or $8.5 million if he makes the All-Star team), can opt out of the last year of his contract next summer and become an unrestricted free agent. But he doesn't appear to want to go anywhere. Within a week of the World Cup ending, Dragic was back in Phoenix working out with the Suns and getting with the Training Staff Mafia to prep for the season.

"Got a very interesting position with the club. Guess I'll break the contract and sign a new one. As I spoke [to the Suns], I immediately during the first week, when the market opens, sign and I will therefore be calm."

Make no mistake, Dragic has spoken to McDonough and President Lon Babby since returning to Phoenix and he was fully in the loop on the Bledsoe deal. Dragic knows that the Suns need Bledsoe, and he wants Bledsoe to stay in Phoenix.

McDonough expressed even more confidence to FoxSports910 on Wednesday afternoon, after the Bledsoe signing was done, that Dragic would re-sign next summer.

"Yes I am," he replied when asked if he is confident the Suns can retain Goran Dragic. "You know, a lot will happen between now and July 1, but we obviously want to keep Goran in a Suns uniform as long as possible. He had a terrific year last year. He loves Phoenix, he loves coach Hornacek and the organization. Those two guys are key parts of our team. We set it up cap-wise to have a lot of flexibility this summer. There's still plenty of money to give to Goran next year."

What would that look like? Assuming Dragic gets the same or more money than Bledsoe, can the Suns afford to spend upwards of $38 million per year on just their top three guards?

Yes, as long as the cap rises as expected. McDonough said on The Drive yesterday what others have echoed all summer in the media: he expects the new TV deal to raise the salary cap by a wide margin as early as next summer and no later than the summer of 2016. And in raising the cap, you raise individual player salaries.

Many assume the salary cap will be at least $70 million next summer. Possibly as high as $73 million. Spending just over half the cap on your best players, those who use 40% of your team's minutes, is very doable proposition. The model depends on player development. There won't be much room for mid-level salaries. The bulk of the team will be stars and kids on rookie scale deals.

The Suns have been doing this dance for thirty years, ever since free agency was introduced in 1988. The better teams generally structure their cap with 2-3 high salaries, 2-3 mid-level salaries and a handful of minimum and rookie deals.

Here are the Suns guaranteed contracts going into next summer. 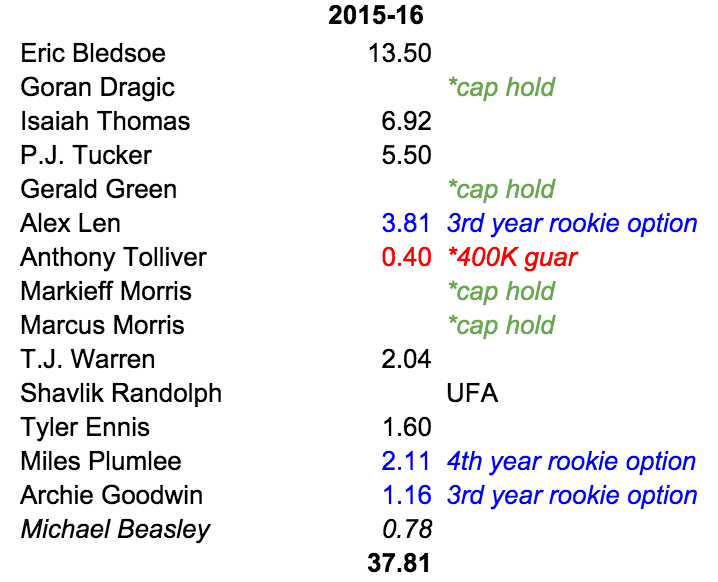 The Suns will enter next summer as an "over the cap" team when all the cap holds are applied to expiring contracts. (Dragic, Morris 1, Morris 2, Green). 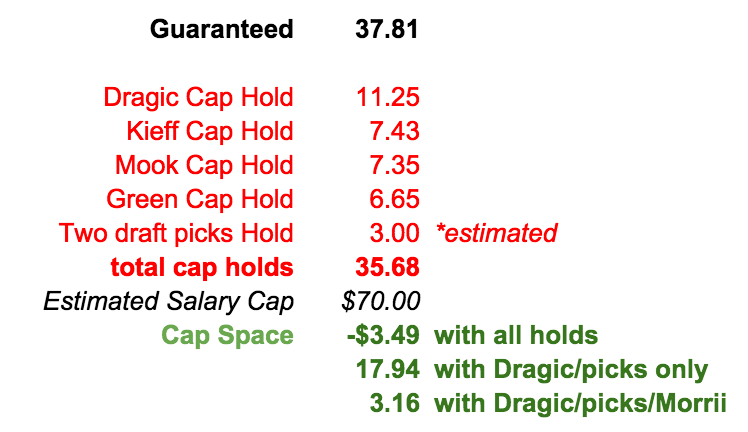 They will juggle the cap holds and free agent spending to their best advantage. Note that the Suns could have $18 million to spend next summer AND retain Dragic if they want to let go of the Morris twins and Green, as long as they get the free agent commitment before Dragic signs.

Even after that, the Suns will have the mid-level exception to spend after Dragic and Morrii/free agent are under wraps. The Suns still have a lot of room to maneuver while keeping all their kids and their stars.

But the big plan is predicated on Goran Dragic staying right in the Valley.

One key component to keeping Goran in the valley just might be signing his brother Zoran. On that front, we won't have to wait long.

"We do have one open roster spot," McDonough said. "We are considering different players and Zoran is one of them. We'll know by Friday. We want to lock down our roster with training camp opening next week."

And this morning we get this report, from sportando.net translation:

Zoran Dragic will not play against Olympiacos because he already informed Unicaja Malaga that he is going to the Phoenix Suns in the NBA, according to Rafael Molina Guerra.

Dragic will pay around €770.000 to buyout his contract and sign with his brother's team.

Welcom to the Valley, Zoran!!