Phoenix Suns to Morris brothers: Here's 52 million. You split it up.

Share All sharing options for: Phoenix Suns to Morris brothers: Here's 52 million. You split it up.

The Morris brothers have always wanted to play together.

UPDATE: Added the formal presser at the end of this story

"Since day one, since the day we picked up a basketball," Markieff Morris said at the press conference where the Suns announced signing the twins for $52 million over 4 years. "This was our dream to play on the same team. We did it in college, did it in high school, and now the Suns made our dream come true."

The Phoenix Suns acquire Marcus Morris less than two years after he was drafted by the Houston Rockets one pick later than Markieff in the 2011 Draft,

"Every time we played the Suns," Marcus said. "I would see Lon and he would tell me he's coming to get me."

"That's off the record," Babby interjected.

Now, the Suns committed to keeping these players together for the next five seasons (one more on their rookie deals, then four more after that).

"It's been a great joy for me personally," Babby said. "To watch them since they've come to the Suns. Not only on the court but as men and leaders of our franchise. These two young guys have such a bond between them, we had to try to find a way to keep them together. The synergy between them will only grow. They are great representatives of our franchise."

Of course, things can change in the NBA, players can be traded. But the Suns have always known - and appreciated - that the Morris twins are a package deal.

With the agreement of managing partner Robert Sarver and GM Ryan McDonough, he offered a total of $52 million over 4 years to the brothers as a package deal, and asked them to split it how they wanted.

"We wasn't even thinking about [extensions]," Marcus said at Media Day. "We were just trying to prepare for the season. It came out of nowhere, actually. We got it done, and we're just looking forward to the season now."

"I did something I've never done before," Lon Babby said to Bright Side of the Morris negotiations. "Once we agreed on the amount of money, I gave them the first crack at how to divide it up."

"Once we agreed on the amount of money, I gave them the first crack at how to divide it up."

"I didn't want there to be any disconnect," he explained. "What I knew would happen is that they are each the best advocate for the other one. So Markieff is going to be worried about what Marcus is getting and Marcus is going to be worried about Markieff. I didn't want to mess up that dynamic, so I gave them a chance and they came up with a good solution."

Somehow, the brothers agreed to a split pretty quickly and it wasn't even right down the middle. Markieff gets $8 million per year, while Marcus gets $5 million per year. Keef put up 13 and 6 in 26 minutes per game last year, while Marcus put up 10 and 4 in 20 minutes. This year, Markieff is slated to start at power forward, backed up by brother Marcus. Keef can slide to the center position in small lineups while Marcus can slide to small forward. They will likely play a number of minutes together each game.

Babby said there are aren't any "no trade" clauses in their contracts, but the twins do not want to be separated and the Suns know they play better together.

"This was the only way," Markieff said regarding free agency for he and his brother. "If we were open [to being separated] we probably wouldn't have signed [yet]."

"This was the only way. If we were open [to being separated], we probably wouldn't have signed [yet]." -Markieff Morris on staying with Marcus

Now, the Suns have signed most of their core to long-term contracts.

"All of this was designed to make sure we had no distractions," Babby said. "That we were able to move forward from that higher level [established last year] and give ourselves the best chance of having another great season."

"It's a dream come true," Markieff said. "We'd like to thank the Suns for believing in us. It feels like a family atmosphere and we felt it was right to re-sign as early as we did and be a part of this family for the long term."

In fact, only Goran Dragic, Gerald Green and Shavlik Randolph are free agents next summer. Anthony Tolliver could join them, as only $400,000 of his $3 million contract is guaranteed.

Dragic is almost certain to re-sign, now that Zoran Dragic is on the team and the Suns have proven that they take care of their own. 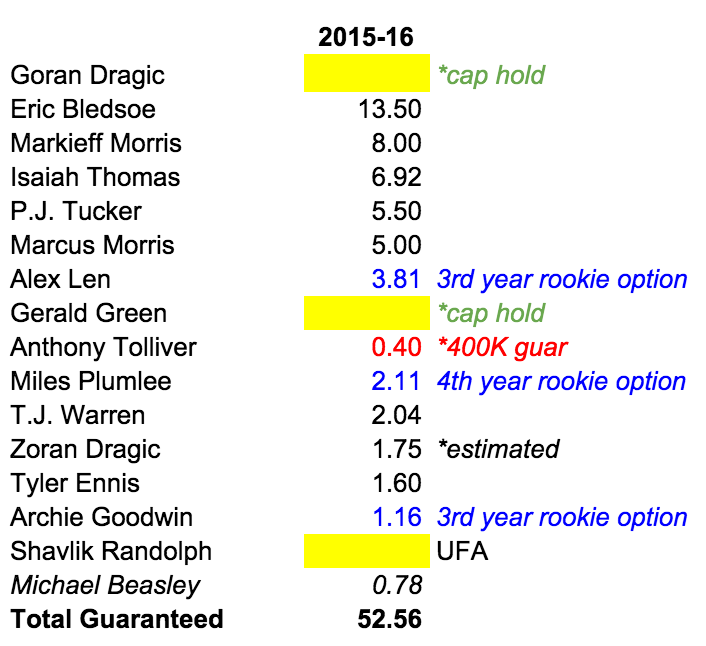 "Our core is young," GM Ryan McDonough said. "The nucleus of the team is sustainable, and can grow together over time. When were healthy last year, our numbers were pretty good.

"We value stability. We don't want to be a team that turns their roster over every year, especially unnecessarily. We wanted to get our core take care of."

When asked if the Morris brothers were proud they paired up on the Suns ahead of the Dragic brothers, Marcus was first to clarify.

"They're brothers. We're twins. There's something unique going on here, man. We got to get Mason [Plumlee] next."