In the ongoing stalemate between Eric Bledsoe and the Phoenix Suns, each side has a good case. And that's the problem.

By now, you've seen the simple instagram post from LeBron James imploring the Phoenix Suns to be reasonable, sit down and talk it over to get his buddy a new contract. Poor Eric Bledsoe is still without an NBA contract, and LeBron feels badly for him.

That's what LeBron meant, right? By using the term "break bread", he simply meant that Bledsoe and the Suns should sit down for a meal and talk it over like adults to come to a mutual agreement? Nope, can't be that. The Suns have been requesting such a meeting all summer.

It's not the slice of bread, it's the size of the whole loaf

Or, did he really mean that the Suns should just give the whole loaf to Eric because they've got more loaves in the kitchen that they haven't put on the table yet?

It all depends on your perspective.

From the Suns perspective, they want to give Eric Bledsoe his market rate. If he'd signed an offer sheet, that would have been the market price and they would have matched it. Short of that, they wanted to give him a contract comparable to his peers, which was set at $12 million per year by Kyle Lowry and is an uptick from Ty Lawson's contract a year ago.

From Bledsoe's perspective, which matches LeBron's, the market itself is unnecessarily baked too small. After being pummeled at the negotiating table in 2011, the players are tired of sharing a too-small loaf of bread because they want to share with their teammates. They know there's a lot more loaves in the kitchen, protected by the CBA.

After taking a pay cut in 2010 to join Wade and Bosh in Miami, LeBron made a clear decision this summer that he would accept nothing less than the max he could get. He wouldn't take a cut to stay in Miami, and he wouldn't take a cut to fit comfortably in Cleveland's cap either. If you recall, Cleveland GM David Griffin had to make several cost-cutting moves to free the max salary slot LeBron required, by shipping former first pick Tyler Zeller, Jarrett Jack, other players and draft picks to a team with the cap space.

Now, that same mentality is being applied to Eric Bledsoe's situation, who shares the same agent with LeBron. Who cares about "market price" when the loaf of bread they are starting with is too small? In their opinion, the owners are sharing too little of their wealth with players in the first place. And now each player should get every penny he can get under the cap. No more discounts for the sake of the team. When owners are making tons of money upon the sale of the franchise, why should players be getting their scraps?

The Suns, for their part, are focused on putting an entire team together. They have to fit 13-15 contracts under one salary cap, which means they don't want to commit too much to any one player no matter how long he holds his breath.

And Bledsoe keeps holding his breath, maybe for the next 9 months.

The Phoenix Suns have offered that $48 million as a starting point of negotiations. Managing partner Robert Sarver has publicly said he's like to sit down and negotiate. Some might says that's the Suns' attempt to "break bread".

By nearly all accounts, the Phoenix Suns offer appears to be a fair one.

Four current NBA executives and two prominent agents were anonymously unanimous in their belief that the Suns made a fair offer to Bledsoe and that he does not merit a maximum-salary contract now.

"He expected way too much," one executive said. "They built up his head, and it gets him out of whack. I'd love to have him, but he's not a max player. All it takes is one team, but one team hasn't made him an offer sheet."

But Bledsoe's camp, Klutch Sports, doesn't agree. They feel that all NBA players are underpaid, and that Bledsoe deserves the max he can get right now whether that fits in the context of "max worthy" or not.

It's quite possible, maybe even probable, that another healthy year in Phoenix could prove his maxi-ness. He could play so well that the Suns or another team - all it takes is one - agree he should get the biggest slice of bread he can get. However, it's also quite possible that Bledsoe could plateau on big minutes over the course of an entire season. He shot at a career high level last year (and was still mediocre in that area). Can he improve? Sure. But he could also regress.

Yet Bledsoe would rather not have to prove himself over the next year. He'd rather just have the max money now, which is why he has not yet simply signed the qualifying offer as Greg Monroe has done. Klutch Sports' own Kevin Seraphin signed his qualifying offer nearly two months ago.

So he's taking the "victim" stance for now.

According to league sources, an "ominous development" has arisen with sides still "very far apart" in contract negotiations. It has even escalated to the point where the "relationship is on the express lane to being ruined," a source with knowledge of the situation informed CSNNW.com.

Phoenix has made it known publicly and repeatedly that they intend to match any offer sheets competitors issue out to Bledsoe. This tactic has succeeded in scaring away any potential suitors so far. However, the effort by the Suns to undermine Bledsoe's market is what has angered Bledsoe and his reps and led to a standoff in which the relationship is now on the verge of being irreparable, we're told.

Other teams that are/were in the process of dealing with their own restricted free agents (Utah, Detroit, Houston) chose not to use the public scare tactics this summer, another factor that has Bledsoe feeling chilly at the thought of a return to the desert, a source said.

That sure sounds like a source inside Bledsoe's camp. Bledsoe's camp is Klutch Sports, headed by Rich Paul, a friend of LeBron James who got into the agenting business as LeBron's agent and has a half-dozen NBA clients. James is the only client beyond the rookie "wall" who can negotiate on the open market.

Firstly, to say that that the Suns are using RFA against Bledsoe is akin to saying lawyers use the law against a defendant, or teachers use test grades against students.

Haynes contends, in that article, that Utah, Detroit and Houston didn't use "public scare tactics" on their restricted free agents. Here's an article from Utah citing multiple sources that the Jazz will match any offer to Hayward. And they did just that, without blinking.

Haynes was right about Houston (Parsons) and Detroit (Monroe) not shouting "we will match anything" from the rooftops. But in those cases, Chandler Parsons (Houston) and Greg Monroe (Detroit) were offended by their team's LACK of interest before free agency began. Parsons expressed his anger after signing the Dallas offer sheet. Detroit went into the process knowing their breaking point without going public on it, seemingly inviting offers. They continued that courtship in July, but it appeared to only go one direction. Monroe was unhappy about Detroit and the entire situation. Parsons got his offer sheet, but Monroe did not.

Interesting that all four teams took basically the same route in RFA - wanting to keep their player, but at the right price - and two of four got an offer. Two were apparently offended by the overt interest from their current team (Monroe and Bledsoe). One was offended by the lack thereof (Parsons). And the last just went along and took the first offer on the table to set the price, happy enough to return to the Jazz once it was all over.

You can bet that Phoenix wishes Bledsoe would have entered free agency with Parsons' or Hayward's attitude, but unfortunately got stuck with an attitude of a different kind.

Back to Chris B. Haynes

Since then, Chris' life appears to have changed. A month after breaking the Bledsoe/Paul point of view in negotiations, Haynes got himself a prime gig covering Rich Paul's Cavaliers in Cleveland. I am guessing the Northeast Ohio Media Group appreciates Haynes' connections inside the Cavs players and pseudo front office.

Another indication that he's got a great relationship with the players, Damian Lillard took time out from Team USA to congratulate Haynes on his new job.

Now, Haynes continues to break news from the Bledsoe camp.

And then on the same day, or the next day, LeBron got into the action by pimping Bledsoe to the Suns, telling them to "break bread". 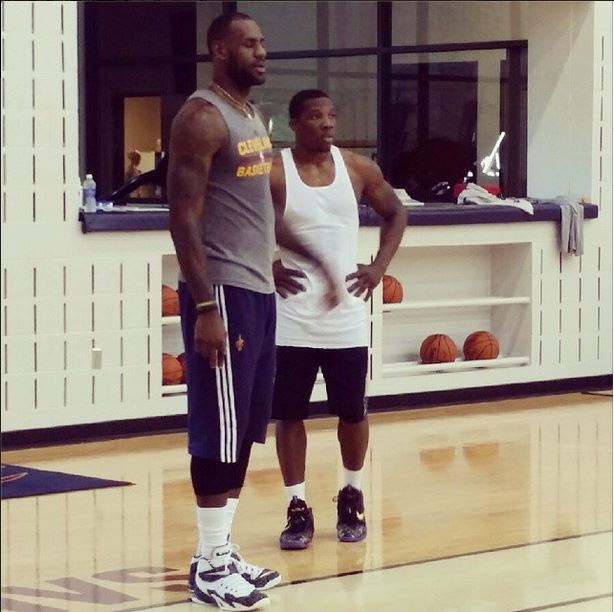 So while the Bledsoe camp has threatened the qualifying offer, they haven't yet gone ahead and signed it. They are still leaving that door open for the Suns to cave.

Meanwhile, the Phoenix Suns remain silent as they try to navigate this unnecessarily-difficult road with Bledsoe. He apparently wants nothing less than five years, $84 million. Even the other teams in the NBA know this, not even bothering to make an offer of anything less (which they can't anyway).

There are many meanings to this phrase, but it generally means 'to share the wealth'. Urbandictionary.com defines it as "to share ones belongings or assets with another person."

The fact that the Suns have already offered $48 million of wealth apparently doesn't matter. The Suns managing partner has even publicly requested to sit back down and share some discussions to further negotiate something in the middle. In other words, to "break bread".

Even the literal visualization of the term is to break it, meaning that some stays with the original owner and some goes to the other person. Bledsoe's camp apparently feels $84 million is a reasonable share of that bread. The Suns feel that if no one else is giving Bledsoe ANY hunk of their bread, why should the Suns generous hunk be disrespected?

The Suns appear to have no interest in completely caving to a 5 year, $84 million contract offer to a guy who has been a healthy NBA starter for just half an NBA season. But at the very least, the Suns seem very interested in sitting down at a table to "break bread".

It's Bledsoe's camp that won't accept the size of the loaf being discussed.