Markieff Morris surprised many when he arrived at Media Day and said he was glad to be with the Phoenix Suns. Whether he meant what he said remains to be seen.

Share All sharing options for: Markieff Morris was a professional at Media Day but more will be needed to win over fans

This summer, Phoenix was struck by a rare phenomenon — twin hurricanes. And while the storms went unnamed by the World Meteorological Organization, those in Phoenix and following around the world knew their names well: Marcus and Markieff Morris.

The damage they wrought — even after they split apart — was well-documented, and all indications suggested that the lingering storm, Hurricane Markieff, would douse the positive vibes at Suns Media Day. 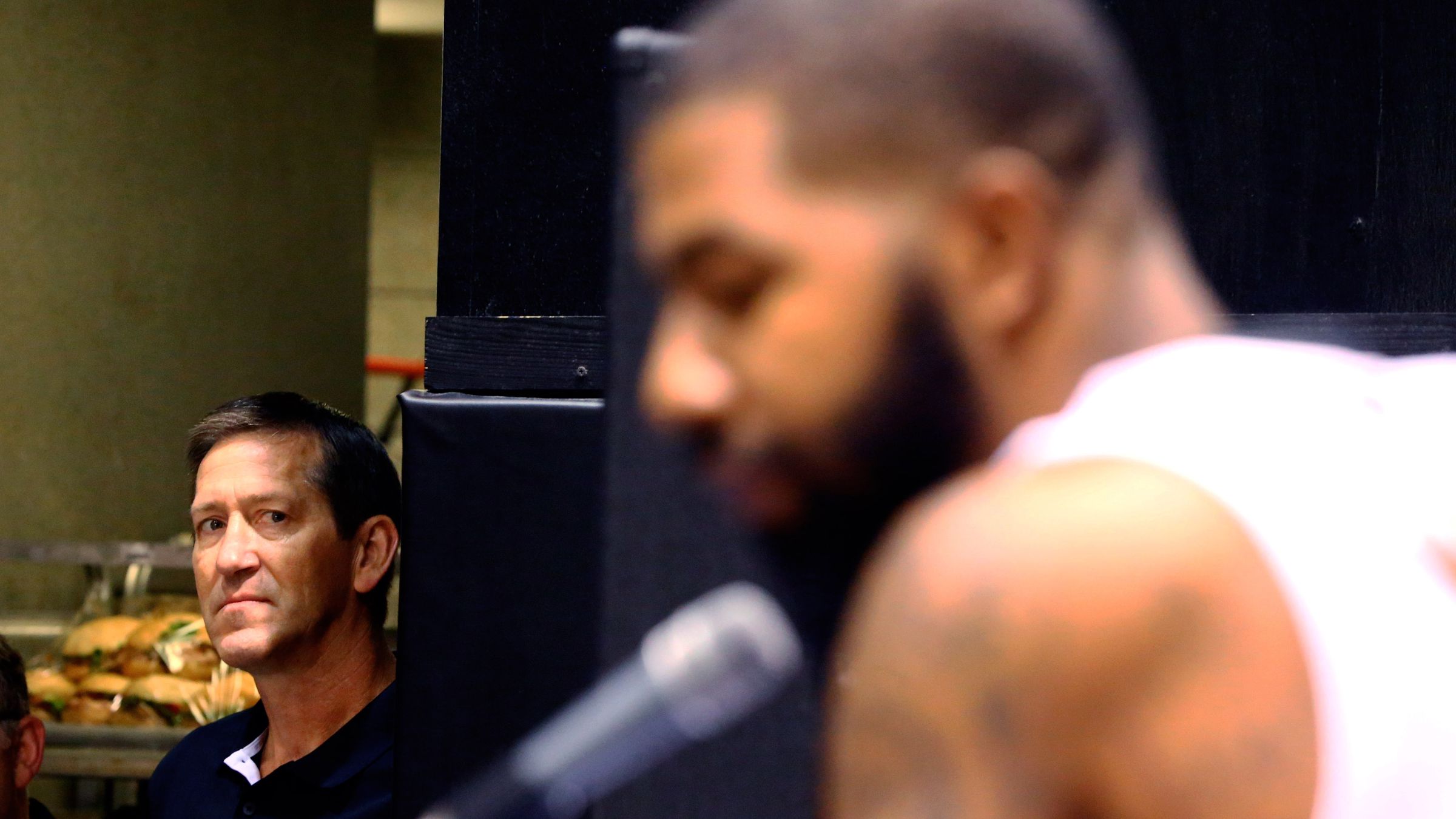 But when Sept. 28 rolled around, there was Markieff, decked out in his Suns jersey, addressing the gathered media without a hint of the dire predictions for the date. He answered (most of) the questions posed to him, spoke glowingly about his teammates and coach, and even cracked a smile through his Harden-esque beard. This all came after he uttered five words few expected to hear going into the day: "I want to be here."

Morris did not do individual interviews that day and seemed to participate in the bare minimum of what was required of him, but he did conduct himself professionally. This turn of events leads one to wonder if the Suns have indeed weathered the storm as coach Jeff Hornacek and others predicted would happen. His teammates, for one, seem to believe the events of this summer were much ado about nothing. Get your very own Bright Side T-shirt!

"I think all this stuff will be behind him," Tyson Chandler said about Morris during Media Day. "You know, this isn't the first time that a player has had miscommunication with management or anything like that, and it's not going to be the last time it happens. And in our league, it seems to always work itself out, and I feel like this won't be any different. It will definitely work its way out."

Eric Bledsoe also foresaw no problems with Morris going forward, even asserting that the portrayal of Markieff that arose this summer wasn't a true indication of the person he is.

"As a teammate, I played with him two years going on three now, and he's a team guy," Bledsoe said. "You know, he's like my brother. ...He's just a wonderful person to me.

It bodes well for the upcoming season that Morris' teammates have not soured on him; however, none of that changes the past. No matter how much the Suns organization tries to steer the narrative away from the summer and towards the court, the fact remains that the summer did happen.

He did tweet, "My future will not be in Phoenix" back in September.

He did say, "One thing for sure, I am not going to be there" back in August.

And with no explanation given by Morris when he finally did speak to reporters, instead offering an oldie but a goodie from the public relations handbook ("I'm looking forward to the season, not really trying to look at the past. I don't really want to talk about what happened this summer."), many continue to wonder what festers just beneath the surface, shielded from public consumption.

Was it all just an act? Was he told to bite his tongue and be a good soldier for the cameras, pretending to be all in so the team would stop operating from a position of weakness in trade negotiations? Or has Morris actually turned over a new leaf, trading in bitterness for the optimism of a fresh season? As of today, it is impossible to give a definitive answer.

While Morris expressed confidence in his teammates and coach Hornacek during his press conference, he refused to do the same for a similar question about general manager Ryan McDonough, fueling speculation that tension still exists between himself and the front office. That does not have to affect the on-court product, however. Michael Jordan famously feuded with Jerry Krause in Chicago, but that didn't prevent the team from winning championships.

Even if Morris and the front office are content with walking on eggshells this season, there are still fences in need of mending here, especially with a fan base that was skeptical of Morris even before it bore witness to the ugly soap opera of this summer. The relationship is broken, and only Morris can take the necessary steps in mending it.

For starters, he needs to work hard and set a good example around the team. That means leaving everything he has out on the court while avoiding the technical fouls that infuriated so many last year. Putting together a career year would go a long way in helping people forget about this summer as well. And if at any point he has the energy left over to call out Suns fans for not supporting the team loudly enough this season, his effort in doing the above will be lacking.

Second, he needs to offer an olive branch to fans. The mere mention of the name Markieff Morris dredges up tons of negatives at the moment, so replacing those negatives with positives would be wise. Be more involved with the Suns' charity work, be more accessible to fans, open up to the media, smile. His teammates, the people who spend the most time around Morris, don't bat an eye in praising him. He would do well to let fans in on the secret.

Above all, apologizing — with a genuine apology — would go the furthest in repairing this relationship. It will also prove to be the most difficult for Morris to actually do. Denouncing his comments from the summer and explaining the reasons behind them would play fantastically with Suns fans. It is not unreasonable to hear someone say that in the heat of the moment, they said some things they wish they could take back. Many fans could relate to such sentiments so long as they were genuine. However, for Morris to do so, he would basically be throwing his brother Marcus under the bus by disassociating himself with those comments — not something likely to happen.

Then again, two weeks ago everyone expected a media day circus so big that ‘The Stick' would be renamed Ringling Bros. and Barnum & Bailey Arena.

As it stands, the tempest of the summer has relented. Morris and company are hard at work in Flagstaff, going through the rigors of training camp as they prepare for the new season. All that remains now is to determine whether the skies have truly cleared or if Phoenix is merely within the eye of a still-raging storm.