Share All sharing options for: NBA Draft tea leaves say Phoenix Suns and Bobby Portis might be a good fit

Those without direct knowledge of the situation or a source who knows the thinking of the top brass, and not just a staffer without decision-making skills, have to use other means to guess where the Phoenix Suns will target their top draft pick this year.

It's certain the Suns have already narrowed down their target list for the #13 overall pick in the 2015 NBA Draft, and it's likely they already have a top choice that may or may not change over the next 11 days.

We know that final decisions are unlikely to be made until Draft Day, June 25, but sometimes the choice becomes obvious early in the process and you end up spending the rest of the time trying to come up with reasons NOT to draft a particular player instead of the other way around.

Let's take a look back at the 2013 and 2014 draft picks for the Suns to see if there are any tea leaves that could have been read before the picks were made.

Last year, Phoenix Suns coach Jeff Hornacek was impressed with T.J. Warren's workout when he visited the Suns before the 2014 draft.

"He has a unique skill of scoring," Hornacek said last year when T.J. Warren visited early in the process, on June 5. "Watching tape, he looks kind of methodical looking. But because of that, he knows great positioning. When he makes a move and he sees the opening, then he explodes. He got hacked pretty good, and he still was able to be strong enough to finish it off."

Now, Hornacek is effusive about a lot of prospects in these interviews. He knows they are trying to make a living in the NBA, so he doesn't want to hurt them by saying anything negative. But we're trying to read the tea leaves here. Usually, Hornacek stops at their strengths. He rarely discusses their weaknesses and what they showed improvement on that in the workout.

With Warren, he specifically mentioned a weakness that he thought Warren had addressed.

"The question for him wasn't the scoring part," he continued, about Warren. "It was the defense. I thought he did a great job defensively. Getting his hands on the ball, he was better than I anticipated from watching tape."

Re-reading notes from the other post-workout interviews from 2014, I did not find many cases where Hornacek went to the trouble of addressing a player's weakness. Maybe that was due to poor questions by the reporters. I dunno. But it's worth noting that you could tell Hornacek really liked Warren.

The Suns reportedly gave him a draft promise and got him a last-minute invite to the "green room" so he could walk on stage when his name was called.

"You can see he's got the feel," said Suns Head Coach Jeff Hornacek after Archie Goodwin's June 14 pre-draft workout for the team. "He's a guy out there that with some work and a couple of years, he can be a very good player."

Our own Kris Habbas made the following notes after the workout.

After the workout the praise of Goodwin was being sung by the entire staff. He impressed them with his shooting and he told me that he has shot the ball really well his last two workouts. Goodwin has the potential to be a very good NBA player with his athleticism and raw ability, but he has not learned how to put it together just yet. Like most 18 year old prospects. A future backcourt (if Goodwin reaches his potential) of Goran Dragic and Goodwin is about as athletic as they come with tremendous potential defensively.

The Suns later brought Archie in for a secret second workout later in June, and then targeted him in the draft, even taking on Malcolm Lee's contract to move up a spot to secure him.

With regard to the 5th overall pick, Hornacek was effusive about Cody Zeller at the time. Zeller came into the Draft with a couple of knocks: very little outside shooting, and relatively short wingspan/length for his size. In the Suns workout, Hornacek noted that Zeller stroked threes with ease. My guess is Hornacek would have pushed to draft Zeller unless a better option was on the board.

That same year, they raved about Oladipo while quietly panning Ben McLemore and others for either refusing to visit (Otto Porter, for one) or requiring a private workout.

The Suns said little about Alex Len in that setting because they couldn't work him out. He did visit, though, and made a great impression on them in his private interview. They drafted him based on his measurables and talent, as well as his hard working personality.

Evaluating Hornacek's comments this year is tougher because he only spoke after half the workouts. He and GM Ryan McDonough split the duties of speaking to the media, even sending Assistant GM Pat Connolly into the fray one day.

But in the times Hornacek did speak, he spent more time talking about Bobby Portis than any other individual talent that visited the Suns.

Everything you need to know about Bobby Portis 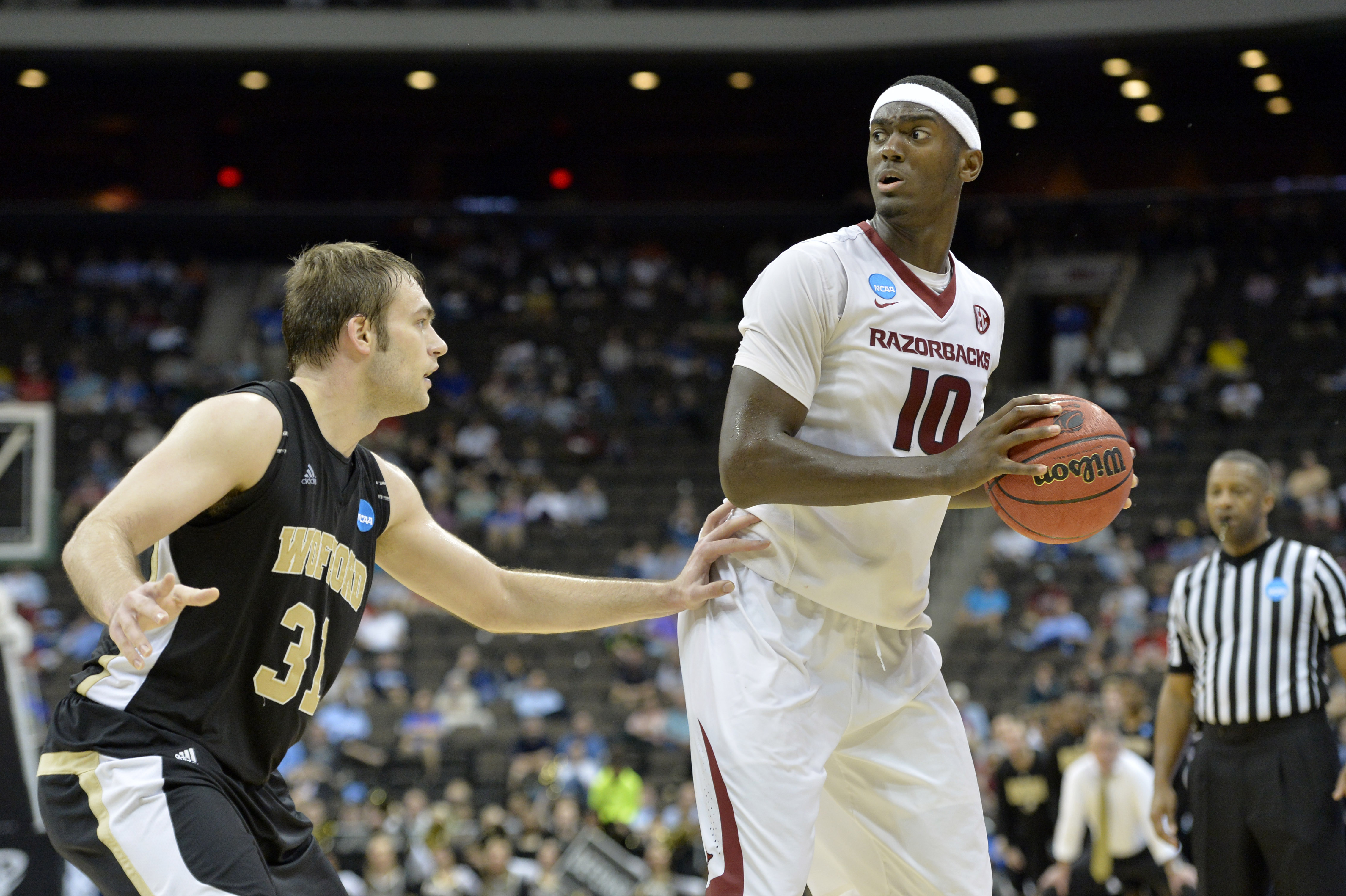 "What impressed us today is how he got after it defensively," said coach Hornacek. "He wasn't afraid, he didn't back off. He really goes after the ball on the boards. When they shot the ball, he's going to get it."

Hornacek has commented for two years how the Suns need to get tougher in the paint and on the boards. He regularly laments the Morris brothers' lack of interest in banging and fighting for contested rebounds. Here, he sees Portis doing what he likes to see.

"Bobby really went after the rebounds today," he said. "To be a rebounder in the NBA you have to be aggressive. You have to want it. He wants it and he goes and gets it."

While going for rebounds is good, he needs his power forward to defend all over the court too.

"For a big guy," he said, "[the question is] can they get out to the three point line on defense? He (Portis) moves his feet, drives hard."

Hornacek followed that up another compliment, saying Portis' effort level wasn't extra pumped just for the predraft workouts like so many other prospects.

"One of our scouts said earlier he's been doing that since high school."

But you can't just play defense and rebound. Hornacek also knows they need offense from the power forward position, which is why the Morris twins spend so much time there. You need the front court to score in the Suns offense or Bledsoe and Knight will feel like they are on an island, and the defense won't sag off them to guard the perimeter.

"Offensively he's got nice moves," Hornacek said of Portis. "Good midrange shooting. He'll have to work on his threes a little bit."

Ah yes, the threes. No, Portis is not going to step in as that "stretch four" the Suns offense needs so badly. Pair him with T.J. Warren and Eric Bledsoe, the threes will be scarce. But do you pass on a guy with all those other strengths because of that one weakness?

"I was very impressed with his effort, his knowledge of the game," Hornacek continued. "He made some great passes today. His overall game really showed he's going to be a good player."

Hornacek spoke after many of the first round targets, but not all. He and McDonough traded off post-workout interviews this year. He did not speak to reporters after Montrezl Harrell, Rondae Hollis-Jefferson, Sam Dekker or Devin Booker visited, so we don't know what he thought there.

He spoke positively about Frank Kaminsky, almost as much as Portis, but the comments weren't over the top ("he knows how to play the game", great shooting, uses his feet to make up for lack of lateral speed on D).

Hornacek was kind about Trey Lyles and Kelly Oubre too (good shooting, so young, can't tell how good they will be) and Kevon Looney (uses long arms to make up space, so young) who worked out with Portis. He didn't mention Jerian Grant individually after his workout against Olivier Hanlan, just spoke about how both laid it all out there to show well in the workout process.

But looking back at what Hornacek has said after workouts in prior years, you can tell he's being genuine. Nothing he's said is outlandish or an overstatement. He's polite and helpful (to their stock) by talking about the positives, but he doesn't make them seem better than they are. (take notes, Lance Blanks!).

You will hear lots of names being linked to the Suns in the next couple of weeks. Maybe Portis. Maybe not Portis, but that says nothing about their actual plans.