We made a big splash on day one of the annual SB Nation Mock Draft, but we weren't done trying to reshape the roster of the disappointing Phoenix Suns.

More: Follow along the whole first round here, on Ridiculous Upside

Yesterday, the mock Suns traded Eric Bledsoe and the #13 overall pick, and Reggie Bullock, to acquire a potential All-Star who was better as a freshman in college than any player on the Suns roster was at that age.

Russell is currently only 18 years old, and yet put up 20 points per game, 5 assists and 5 rebounds for Ohio State, leading them deep into the NCAA tournament. 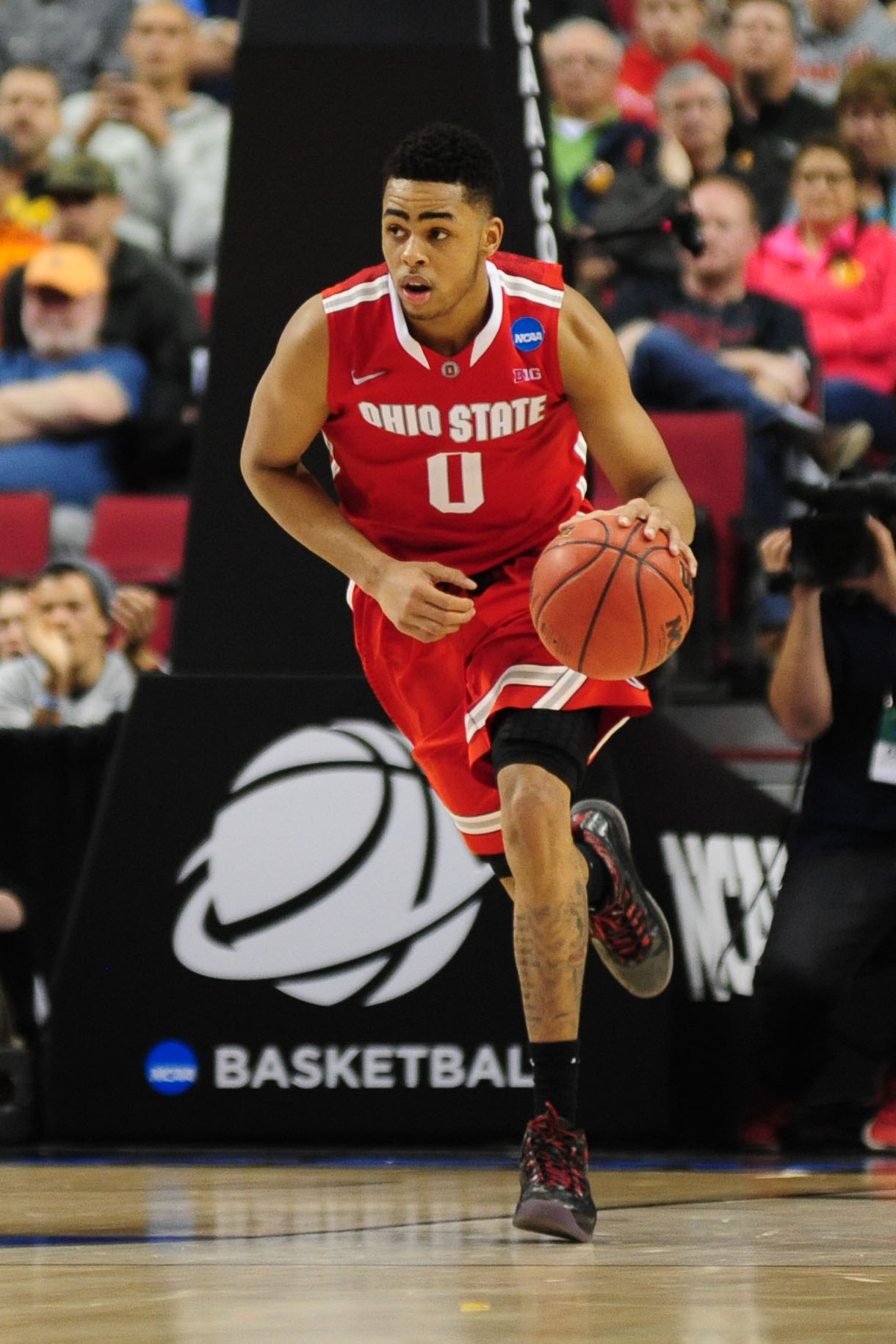 Once we completed that trade, we had a team with two starting guards - Brandon Knight and D'Angelo Russell - but no other changes to the lineup.

The rest of the draft was dedicated to making further changes.

Just like Eric Bledsoe and Reggie Bullock were available, so too were the rest of the guys under contract. Therein lies the rub. The Suns can only trade players under team control for the 2015-16 season. This includes Markieff Morris, Marcus Morris, P.J. Tucker, Archie Goodwin, Alex Len, T.J. Warren, Danny Granger (player option picked up) and even Jerel McNeal (non-guaranteed contract).

As a front office (the BSotS writers), we tried to focus on what we could get for the Morrii and Tucker, while keeping the rest of the young guys.

When I listed those available players for trade, Jim C's first reaction was "this is depressing". And that was even before the Bledsoe/Russell trade.

After that trade, it was a matter of having fun and trying to get back into the first round at the expense of one or two rotation players.

Trading back into mid-first round

I dangled Keef, Mook and Tucker to the mid-first teams and got no takers.

No one wanted middle-aged mid-level talent ahead of potential, even though the talent in the mid-first would be lucky to have careers like the Morrii and Tucker. That's the nature of a draft. You'd rather have the young guy with potential to be great than the one already proven to be just average.

So would I. That's why I was trying to make the trade.

When I got crickets from the mid-first teams, I quickly realized I should try my stair-step approach again. Get a commitment for a pick in the 20s for one of those guys, and then use that to bargain higher into the round.

So I trolled the lower-first teams, and lo and behold the Cavaliers were willing to trade their #24 pick for a wing player under contract. Just like the real-life rumors, only this was 2 weeks ago before those came out so give the Fearthesword.com guys some credit here, the Cavs were interested in the win-now approach.

Yessiree, we were able to split up the twins and bring back a huge trade asset in Haywood and the #24 overall pick.

I asked the Cavs to commit early so I could use the #24 pick to trade up again. I feared that by the #24 pick all the PFs we wanted would be gone.

At that point, I re-engaged the other teams from the #12 pick on down, offering Tucker or Markieff Morris and/or the #24 pick for their mid-first pick so we could get that PF we wanted.

The Heat (who'd traded back from 10) took Frank Kaminsky at 13. Oklahoma City, uninterested in any trades, took Kelly Oubre at 14.

The Hawks had no interest in trading either and broke my heart by taking Bobby Portis at 15. He was our front office's main target at that point.

Finally, I found a taker. The Bucks had traded back and now had both the #17 and #19 overall picks. I pinged Frank Madden and offered a couple of packages just to see what he would bite on.

The Bucks bit, and took door #3, as long as I didn't take Kevon Looney. He was their target.

Now that I had interest, I threw the options back to the BSotS front office staff to see what they thought. I didn't want to make the trade without at least a consensus. No one wanted to trade Keef for the pick straight up, so I'm glad the Bucks didn't jump on that offer. Keef is too valuable to replace entirely. We really just wanted another PF to back him up, not replace him.

Ultimately, the staff agreed that the #24 and Cleveland's 2016 pick was worth trading up to #17 to get the PF we wanted.

More: Sonics Rising recaps the Suns/Cavs/Bucks three-way trade (as it was announced)

Remember, in this mock draft we're really only dealing with first round picks. I could have offered a handful of second round picks instead of the Cleveland pick and the Bucks would likely have taken the offer. But that seemed like too mucj work, so we agreed to swap the Cleveland pick.

Harrell is the pick

This is where it got dicey amongst the BSotS staff. Support for my plans was dwindling as the hours flew by. Russell was near-unanimous (though not unanimous), and Mook trade was pretty easily agreed upon. Moving up 7 spots from 24 to 17 at the cost of the Cleveland pick was barely approved. I may have even pulled rank at that point, but it was happening fast so I don't quite remember.

Where I DID pull rank was taking Montrezl Harrell ahead of Trey Lyles.

Portis, Turner and Kaminsky were gone by the 17th pick. The staff was split on Lyles vs. Harrell as the best remaining PF option on the board. The votes went back and forth for a while, each staffer making their case for one or the other.

I went back and watched the scouting reviews on both players, read the reports, and came to the following conclusion:

Trey Lyles ceiling, probably, is a little bit better version of Markieff Morris. A below the rim player with a variety of offensive moves, questionable defensive chops and very little rim protection.

Montrezl Harrell's ceiling, probably, is a Kenneth Faried type with better defensive ability and maybe even better offense. Faried's calling is rebounding and dunking, just like Harrell. But Harrell is actually known as a quality defender and has a tiny bit more offense than Faried even has today.

I made the call to go after the unique (to the Suns) skillset and take Harrell.

Harrell might not have the ceiling of Lyles, but he's a surer shot at making it in the league and he already knows his "wheelhouse."

Harrell was the pick.

Once I made the pick and told the staff, a mini-mutiny arose. Those in Lyles' corner lambasted my short-sighted decision, and for good reason. Lyles has the better ceiling and is the better-rated prospect, while Harrell is lately barely making the first round anymore.

But I believe Harrell is getting undervalued, just like Faried did in 2011 and just like Paul Millsap in his draft year.

Harrell is being downgraded because of his three years in school (familiarity breeding contempt) and his height (6'7"), but you don't rebound with your head. His wingspan is 7'4", one of the longest in the draft and he's proven to be a relentless rebounder.

For what it's worth, the SonicRising.com staff who are providing independent analysis of the mock draft for us, really like the Harrell pick. Check out their comments here.

Here's on snippet from those fine folks:

If you're looking for the next Draymond Green, Montrezl Harrell is probably the closest player to it, in this draft. He's 6'8" and 240 lbs, with a freakishly amazing 7'3" wingspan. He's built like a bowling ball.

The Suns can surely use his girth in the front court. He works hard on the boards and on defense. This past season he even added a respectable mid-range jump shot, showing the type of improvement that he will need to be a contributor at the pro level.

He may be small, but if he turns out to be a player in the vein of Udonis Haslem, instead of Green, no one will be complaining.

Now that I had Harrell and Russell in the fold, I had the chance to trade into the first round again.

Golden State was wanting to part with their #30 pick for very little back, as long as I took David Lee with it. Lee is an expiring contract next year, but he's also a good $15+ million on the cap. I could conceive trading Markieff next month in free agency and entering 2015 with Lee/Harrell PF tandem, but didn't want to strap the team by taking away all the salary cap room just to acquire Lee.

I floated it to the team, and we agreed to decline the trade.

In the end, here are the changes:

The real gem was D'Angelo Russell, at the expense of Eric Bledsoe. Then we replaced #13 with #17 effectively. A slight trade-down there. We swapped Marcus Morris' rotation spot for Jason Thompson (bigger, better rebounder). We added Darren Collison as the vet backup at PG.

But now the Suns have a player with more All-Star potential than anyone previously on the roster in D'Angelo Russell. And they have more rebounding prowess than they've had in years (Thompson, Harrell).

And they have more maneuverability this summer in the trades and free agent market.

The mock Suns now have $17 million to spend on free agents (while Knight is an RFA with an 8.8 million cap hold) PLUS Haywood's $10 million non-guaranteed deal to be used in trades.

Haywood's contract is huge. It allows the Suns to take a good player from another team without them having to take back salary. A lot of teams will cap out this summer, making a good player available if the Suns need it.

Next summer, the mock Suns will anywhere from $36-45 million to spend - more than they were projected to spend before shipping off Bledsoe and Morris' long term contracts.

Looks a lot more balanced to me. Pure position players at each spot, with a starting-potential prospect at 23 or younger at every single position. Knight (23), Russell (19), Warren (22), Harrell (22) and Len (22) can all grow together over time.

The 2015-16 season might not have the playoffs at the end, but it could be the beginning of a very bright future if Russell becomes the player many think he can become.

And this is BEFORE free agency, where the Suns will have a ton of flexibility to add another star if one becomes available.