The signings of Tyson Chandler and Mirza Teletovic, as well as the re-signing of Brandon Knight, will help the Phoenix Suns create spacing to make their offense hum.

Share All sharing options for: Phoenix Suns made signings to recharge their gravity and spacing this season

There are many concepts to explain how NBA offenses succeed and fail. Outside of the obvious - scheme and talent - are the difficult to quantify concepts like misdirection and spacing.

The San Antonio offense relies on exquisite ball movement to be successful by creating open shooters via misdirection. No one player hogs the ball, and each offensive possession can be an orchestra of multiple skip passes to get the ball to an open shooter as the defense scrambles and loses someone on rotation.

The Golden State Warriors offense uses the same principals of high-volume passing to create open shots and adds in some of the most dead-eye shooters in the game. The combination of those tools allows average shooters like Draymond Green and Harrison Barnes to succeed.

Other offenses rely on a concept called 'gravity' to draw defenders to certain parts of the floor, opening up other parts for drives, dishes and open shots. ESPN's Kevin Pelton has written on this topic many times to explain how role players like J.R. Smith, Kyle Korver and Channing Frye can make an entire offense better by just being on the floor.

Gravity is easiest to explain within the concept of a dead-eye three point shooter without a conscience. If Kyle Korver is liable to hoist a three pointer as soon as he touches the ball, the other team's defender cannot afford to leave him in a defensive rotation. So, when Jeff Teague and Al Horford set up a pick and roll on the other side of the floor, the defense is unable to rotate to help the picked defender.

Gravity also exists with big men. Guys like DeMarcus Cousins, Nikola Pekovic and Blake Griffin keep defenders on their hip as well because they are such threats to score when they catch the ball.

In the absence of a scary big man, the Suns have relied on gravity along the perimeter to open up the offense for the drive-and-dish-or-score skills of Suns point guards the past two years.

Last year, until the last month of his second season that is, Hornacek orchestrated a 10th ranked offense versus a 17th ranked defense. In his first season, he pieced together a 7th ranked offense against a 13th ranked defense. Neither combination was good enough to push the team into the playoffs. Neither team had a go-to offensive player or an All-Star, though Goran Dragic came close to both (20 points per game, 3rd Team All-NBA).

But they did have some gravity. In 2013-14, it was Channing Frye's willingness to shoot threes without hesitation that caused defenses to be stretched and driving lanes to be opened. Add in P.J. Tucker, who always pulled a defender to the corner, and the Suns had some breathing room. The Suns were second in the league in three-point rate for most of that year, finishing 5th.

The first half of 2014-15 missed Frye, but had Isaiah Thomas added to Bledsoe and Dragic to force defenders to stay on their hip all game to defend the myriad of offensive moves they possessed. Unfortunately, without Frye or a big threat at the rim, the Suns offense was tougher to watch even before all the trades. After the trades, the offense became a hot mess. By the end of the year, they were down to just 10th in the league in three-point attempt rate.

After the trades of Dragic and Thomas, the Suns offense went completely into the tank, ranking 28th in the league in points per possession, 26th in FG%, 27th in eFG% and TS%, and dead last (30th) in three-point shooting percentage.

In short, there was no more gravity. When you're not a threat to shoot threes - even running themselves off the line into contested twos by season's end - and you don't have a big man scoring threat at the rim, defenses can sag to the paint and choke off drives. Markieff Morris required a defender's attention, but that attention was around the free throw line which made it easier to sag off to stop a drive.

The Suns made a lot of changes over the summer. They didn't add any bona fide stars, but they did add offensive specialists who can suck the defense in one direction or another in Tyson Chandler, Mirza Teletovic and Brandon Knight. 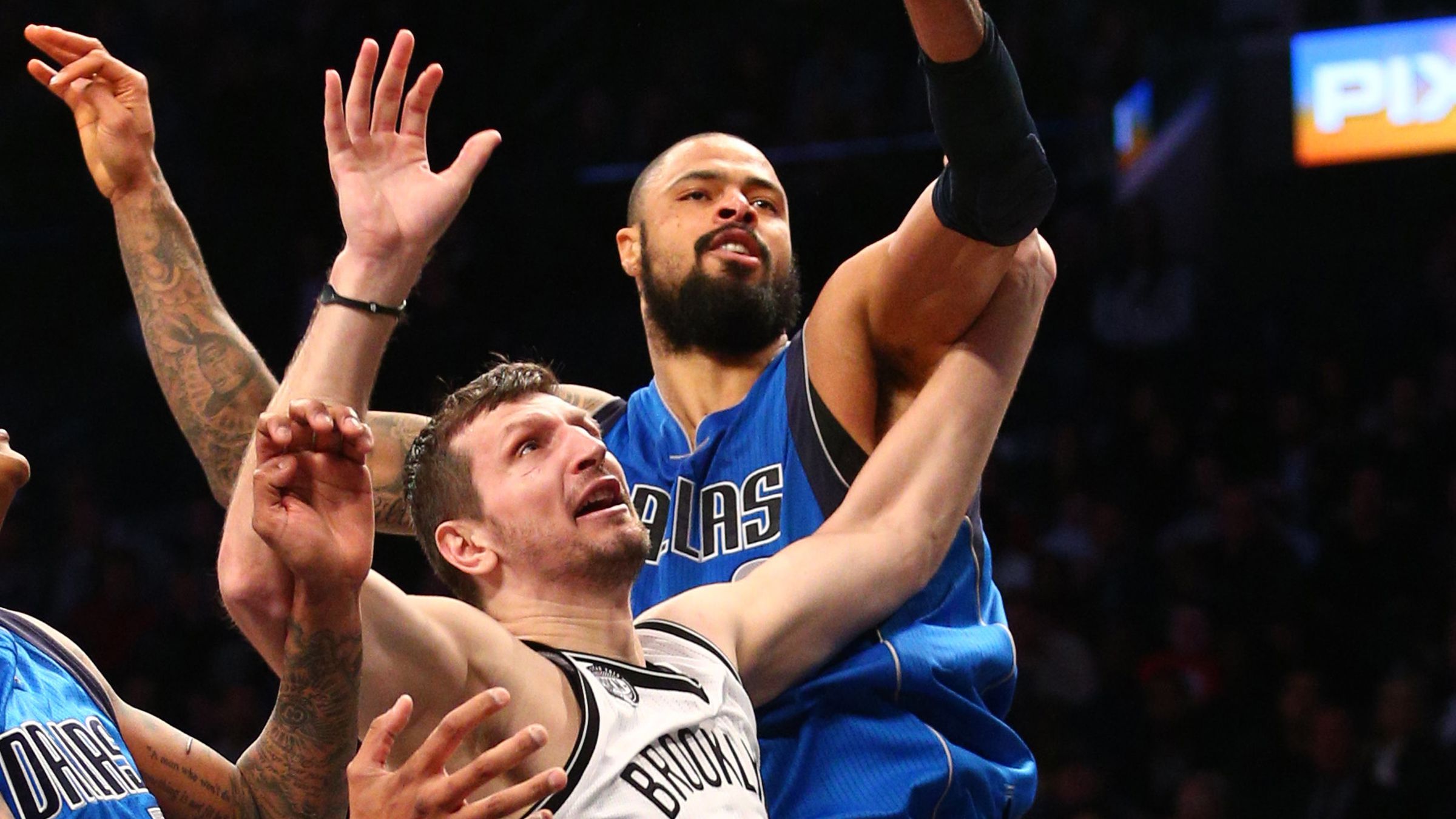 See how two free agent signings can have a big impact

All of his scoring is on pick-and-rolls and offensive put backs at the rim. He forces the opposing big man to dive with him to the hoop, rather than contest the ball handler on the perimeter like most defenses do these days.

On the outside, Mirza Teletovic draws the defense in the other direction. When he trails the play or sets the pick, he's already rolling out to the perimeter for a three pointer.

Of the threes Mirza took last year with Brooklyn, 91% of them were on catch-and-shoot plays, and only 5% of all his threes were wide open. Since he doesn't handle the ball much and yet had nearly all his shots contested, that means defenses stay with him when he didn't have the ball. But he still gets off the shot anyway. When he was healthy in 2013-14, he made 39% of his threes.

As a stretch four, Teletovic more fits the mold of Kevin Love (7.2% of threes being wide open despite 85+% of threes being catch-and-shoot), Channing Frye (7.2%) and Ryan Anderson (6.2%). Other stretch fours don't get nearly the same attention, like Patrick Patterson (13% wide open despite 90+% of all threes being catch-and-shoot), Donatas Motejiunas (20%), Draymond Green (12%), Paul Millsap (18%) and Markieff Morris (17%) among many, many others.

Brandon Knight took a lot of threes last year too, and will be expected to space the floor this season next to Eric Bledsoe. Knight made 41% of his threes last season before the trade to Phoenix, with 38% of them open and only 5% wide open primarily because he was normally handling the ball. Nearly 60% of his threes were of the catch-and-shoot variety, much higher than any of the Suns point guards the last two years. Since only 5% were wide open, the defense stayed on his hip with or without the ball.

By comparison, about 7% of Goran Dragic's and 3.8% of Isaiah Thomas' threes were wide open last year, so it's good the Suns added some guys in Knight and Teletovic who can draw defenses and make contested threes to replace those who left.

The threat to take and make the three is key to good spacing. If the defense doesn't see you as a threat, they won't guard as closely and will spend more time sinking into the lane to help other areas of the defense. The opponents didn't have much respect for the Suns shooters after the trades last year. A full 17% of Markieff Morris' threes were wide open last year, as well as 13% of Tucker's and 10% of Marcus Morris', yet they didn't make them at the rate the Suns needed (33%, 34% and 36%, respectively) to force the defense to adjust. Even worse, by the end of the season these guys were running themselves off the three-point line to create a mid-range shot more in their comfort zone.

Offense will be work in progress this year, centered around creating space for Knight, Bledsoe, Morris and second-year player T.J. Warren to work inside the three-point line.

If Teletovic can reprise the effect Channing Frye had, plus some lane-sucking rolls by Chandler, the Suns will have a much easier time scoring the ball this season.