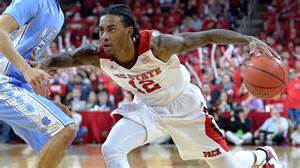 While most attention on this site has been paid to the 1st round pick of the Suns and the Wizards as sources of talent for this team. There are a ton of sleepers in the late first round and early second round to pick up in this draft. I will be highlighting 1 player for every position that are projected to go around this area who could end up being serious hits.

Many people have compared Barber to Allen Iverson. While this is an overshoot, there is no doubt that Cat may be the quickest player in all of college basketball at the moment. Not only that, but his shot has been vastly improved from over the last couple years to the point where he is shooting about 36% from outside on top of having outstanding touch on the drive. Here are some highlights from his game vs Duke where he shows his jump shot game and ability to find players when he cant make the play himself.

Here is also another game vs another big time team (North Carolina) where his athletic ability is on full display.

in 2015, Cat averaged a mind blowing 23 points a game and carried the load for his team on solid shooting numbers. Barber would be an amazing backup PG.

Brogdon has been one of the best 2 way players in college basketball for a while now. The ACC player of the year and defensive player of the year (alongside his 3 time ACC 1st team nominations), is going to be headed to the NBA. He has been known as a great defender, hardworker, and leader for his entire stint as a Cav, however, now he has upped his outside shot to an impressive 40% just this past year and has shown that he is a complete offensive player. Brogden doesnt not posses elite tools to be a lottery pick, but he is arguably the most complete player in this entire draft in terms of pure skill. The youtube link posted is him against North Carolina, where he displays his full set of offensive ability from driving to shooting.

After being the 3rd option for Wisconsin during the time of Frank the Tank and Dekker. Hayes finally is being the feature player on the team, and has handled it very well. Hayes has always been known as a top tier defender with his length (6'8", 7'3" arms) yet impressive mobility and agility to keep up with quicker forwards, and this year he upped his offensive game to just around 16 points a game to go along with 6 rebounds and 3 assists. Here is a solid overall game displayed by Hayes, its in a different language though.

As a combo forward, Hayes looks like he can be a guy off the bench who can come in and defend the best forward on the court, no matter if he is on the wing or in the post.Here is a scouting video done by DraftExpress. Top link is strengths, bottom is weaknesses.

The 6'8" post man for Kansas has been a straight fiend for his team this year. Averaging well over .500 on the floor combined with a 44% clip from the outside, he has an all around game offensive that has lead Kansas to being one of the best teams in the nation. While he isnt as long or strong as many of the power forwards in today's NBA are, he is a mentally and physically tough leader, who has shown his board dominance by averaging over 6.5 boards these past 3 years. Here is another game so that you guys can get a feel of how his game is.

Unlike all of the other players on this list, Hammons didnt really play above his ability, but he still put up monster stats despite not impressing scouts who viewed him as a potential lottery pick. At 7'1" and 265 pounds, he is one of most massive men in college basketball, and would be a handful to handle even for NBA players. He is a massive lob target who also has decent mobility. Throughout his career, he has also enforced the rim with authority, averaging a little over 2.5 blocks a game for his career. This past year, Hammons has seen a rise in offensive usage, and has taken advantage of it, using his massive size to get a nearly 60% from the floor to average 15 points a game. Here is a scouting video from 2014:

Here is an example of what Hammons is capable of.

Thank you guys for reading.

If you were to have one of these guys on the Suns, which one would you prefer?