He stepped up admirably amid the injuries last season and was equally impressive both on and off the court.

Devin Booker joined the Phoenix Suns as the franchise's latest end-of-the-lottery draft pick in 2015, but by January, he was hard at work proving he would be no Earl Clark or Kendall Marshall. Even as the season went up in smoke around him, Booker continued to shine, outperforming just about everyone's expectations for the league's youngest player.

The Suns' struggles this season to resemble a basketball team allowed Booker the opportunity to showcase his offense. He averaged 13.8 points per game, which ranked him third on the team and fourth among rookies behind Karl-Anthony Towns (18.3), Jahlil Okafor (17.5), and Kristaps Porzingis (14.3) for a full season. His 13.8 scoring average was also the highest by a Suns rookie since Michael Finley in 1995-96 (15.0).

The accomplishments kept coming for Booker, too. He had the highest scoring March by a Suns rookie since Walter Davis in 1978, he joined LeBron James as the only teenagers in NBA history to record back-to-back 30-point games, and he became the fourth-youngest player ever to score 1,000 points (behind James, Kevin Durant, and Kobe Bryant).

Fatigue, though, likely played a significant factor in Booker's poor shooting. During January, Booker shot 44.3 percent from the field as he first stepped into the starting lineup for the injured Eric Bledsoe, but his shooting dropped to 33.6 percent in the month of February. This drop coincided with the absences of both Bledsoe and Knight, leaving only unproven players as scoring threats and allowing teams to load up against Booker. He picked it up again in March, shooting 43.2 percent, but looked to be wearing down by April, as he closed the final month of his rookie season converting just 37.7 percent of his shots.

One area of Booker's offensive game that did not get much recognition was his ability to get to the free throw line. He attempted 3.4 free throws per game, which was behind just Bledsoe, Knight, and Archie Goodwin on the team, and that number jumped to 4.4 per game as a starter. It didn't hurt that he shot 84 percent from the charity stripe, either, which was the second-best percentage on the team.

It was asking a lot for the Suns to lean on their 19-year-old rookie as a main offensive threat this season, but Booker accepted the challenge. While he had plenty of moments where he looked like a rookie, he also had moments where he could have been mistaken for a player well beyond his years. Booker can stand to improve his efficiency from the field for next season, but that should come with nothing more than having a healthy complement of teammates around him (fingers crossed) and better conditioning to withstand the rigors of NBA life. Factor in even modest growth from this season to next, and offense should be the least of Booker's concerns.

Speaking of concerns, defense should be one for Booker heading into next season. He averaged 0.6 steals and 0.3 blocks on the season, and those were bright spots.

For the season, opponents shot 48.5 percent against Booker's defense, which was 4.8 percent higher than their season average — worse than every Sun but Goodwin. From within 10 feet, opponents shot 6.6 percent better, and from 3-point range, they shot 6.2 percent better, making Booker largely ineffective as a defender from two critical zones.

However, it's not all bad. Booker's worst month came in December, when opponents shot 12.2 percent better against him, but he followed that up by holding opponents to 0.1 percent worse in January and 0.6 percent worse in February. He reverted from there, but it was at least something positive to build on for 2016-17.

For a rookie to be thrown into the fire like he was, Booker showed fight. He lacked the strength to keep stronger players from moving him around and the familiarity to know players' tendencies, but both of those will come in time. And although he looked lost at times on the defensive end and his focus would come and go, he didn't back down and was one of the Suns who consistently delivered hard fouls to keep opponents from getting and-1 calls.

He is frequently compared to Klay Thompson as a player, but Booker has a ways to go if he is to match Thompson's level, with the biggest step to take coming on the less glamorous end of the court.

Booker showed a surprising ability to make plays for teammates this season. He only averaged 2.6 assists per game and had an assist-to-turnover ratio of 1.25, which was middle of the pack on the team, but after Bledsoe was lost, his assists rose to 3.6 per game from Dec. 28 on and rose to 3.7 while Knight was out from mid January to mid March with an assist-to-turnover ratio of 1.56.

Even though Booker's overall assist totals don't stand out a great deal, they do in context. He was seventh among all rookies in assists per game, with the other six all being point guards.

And Booker knew how to make his passes count. On the season, 9.9 percent of Booker's passes resulted in an assist, which ranked behind only Jenkins (10.8 percent) and Bledsoe (10 percent) on the team. And only Bledsoe and Knight averaged more potential assists (passes that would be an assist if the player makes the shot) than Booker. Looking only at rookies, Booker ranked fifth for assist-to-pass percentage and seventh in potential assists.

While the Suns knew Booker was a knock-down shooter when they drafted him, his ability to see the floor and create shots for teammates was a pleasant surprise. With 65.4 percent of his assists going to Alex Len, Mirza Teletovic, Tyson Chandler, and P.J. Tucker, he definitely kept an eye out for the guys who needed help getting their offense.

Oh, and he was one of the team's best lob passers all year — a quality that deserves special mention on this team.

Knock knock. Who's there? The most mature 19-year-old in sport, that's who.

While some rookies this season were busy getting into bar brawls in Boston or secretly videotaping their teammates talking about cheating on their fiancées, Booker engaged in none of it.

When Jeff Hornacek was fired on Feb. 1, Booker responded with the following:

When he competed in the 3-point Shootout during All Star Saturday, he showed poise in finishing third to the Splash Bros. — Thompson and Curry — after advancing to the finals via a tiebreaker round.

And when he could be out at the clubs or doing, you know, 19-year-old stuff, he can instead be found interacting with the community in ways that speak volumes about him as a person.

BEST DAY OF MY LIFE . THANK YOU @Suns & @DevinBook my prom day is made pic.twitter.com/pLUL0OLwgH

The most important assists happen off the court. Your Suns made a big one at @StJude

When it comes to softball they're opponents, but in basketball they're family. @suns @PhoenixMercury #FitzSoftball16 pic.twitter.com/Luibb9GwoG

It is no wonder he showed such maturity on the court for the Suns; look at who he is off it.

Booker far exceeded the expectations for him coming into the season. He proved to be an explosive scorer and proficient playmaker already at his young age. He does have areas to improve in — as all rookies do — but he's headed in the right direction.

"I learned that I don't act as young as I am," Booker said during exit interviews. "And everyone stressed that to me throughout the year, just the maturity that I have for a 19-year-old and that I do really belong in this league. I never doubted it, but I think a lot of people did with me being the youngest player in the league. They doubted how can a 19-year-old play in the NBA, but I think I've proved to people that I belong here."

Already this offseason, Booker has put in time to hone his craft. He recently worked with Coach Earl Watson and Baron Davis at UCLA, where Davis helped teach Booker how to fool defenses into giving him the shot he really wants. 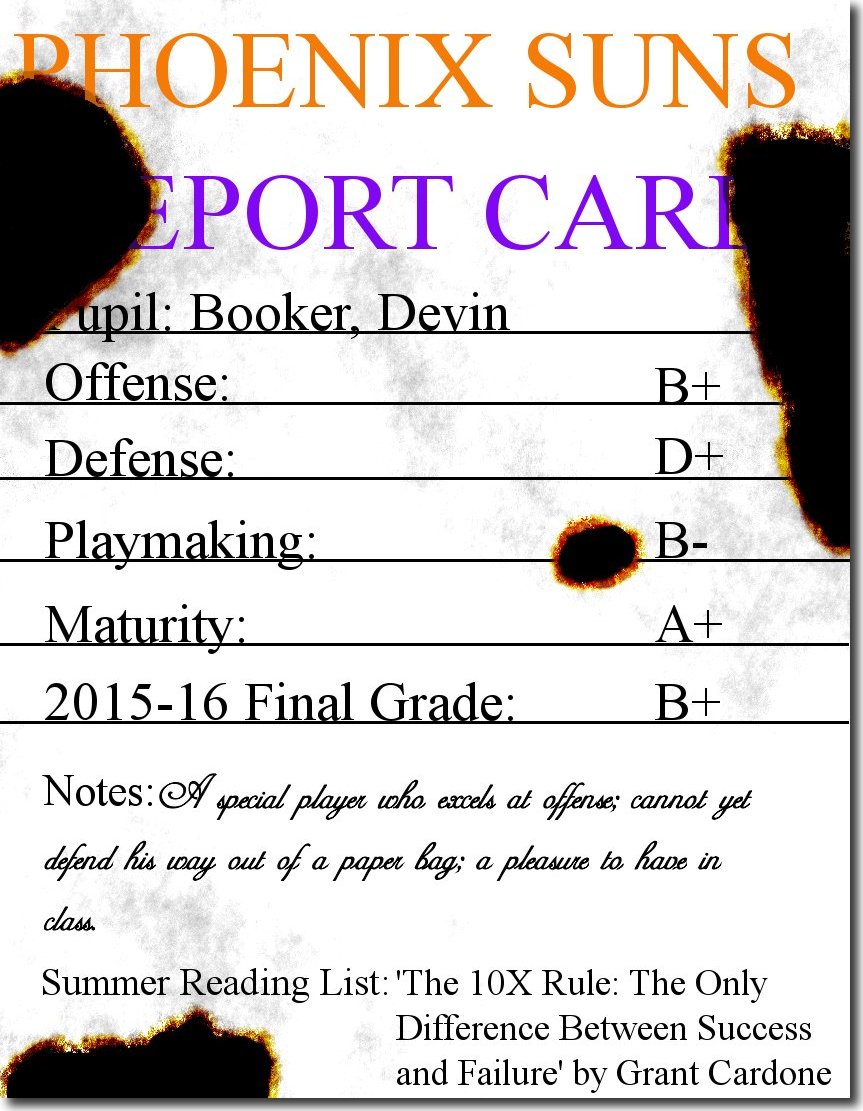 All stats courtesy of NBA.com and basketball-reference.com.

Phoenix Suns 2015-16 Report Cards: The whole team in one place