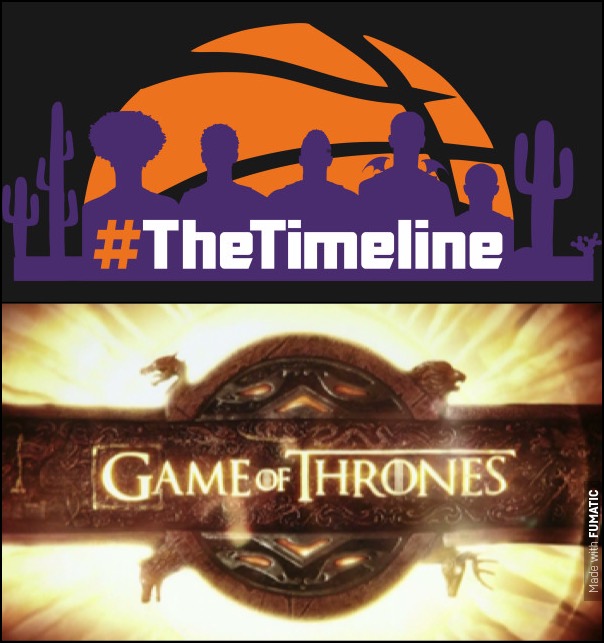 A lot of this offseason has been centered around #TheTimeline and developing a young core that includes Devin Booker, Josh Jackson, Dragan Bender, and Marquese Chriss. It seems like this is the first time in the past decade our franchise has a set direction. For years we have been in the NBA purgatory of mediocrity or "8 seed chasing". Indubitably, we should be excited about this newfound direction and enjoy the process. However, if you are expecting all 4 of our core youth to be here in a few years I’m sorry to inform you that won’t be the case.

Robert Sarver in the season ticket holder’s meeting repeatedly brought up the year 2020 and having 3 Allstars to start contending. Achieving that type of roster is much easier said than done. The Suns just tanked basically the entire backhalf of this past season and ended up with just the fourth pick. Phoenix has never been and never will be a marquee free agent destination such as Miami, LA, and New York. The NBA could care less if the Suns are a 25 win club for the rest of time simply due to being a small market team. The stakes have always been tougher though so this isn’t anything new.

Phoenix has accumulated a load of young players and assets over the course of Ryan McDonough’s GM tenure. He has repeatedly said that these assets will be cashed in the future for a great player. From the outside NBA fan, it may seem like McD hasn’t lived up to this principle at all. He has had a legitimate chance at obtaining Demarcus Cousins, Paul George, Jimmy Butler, and most recently Kyrie Irving. Personally I think he has made the right move in not obtaining any of those players. Yes, it may seem like "well who the hell is he waiting for" and that is a very valid point. However, I don’t think the issue is who we are waiting for, it’s a matter of when will we be ready to acquire a star and make an immediate push into "contention".

I am a HUGE Game of Thrones fan. As a lot of you know the series is coming to an end soon and storylines are beginning the wrap up. If you are unfamiliar with the show it basically is a bunch of characters from all around "The Seven Kingdoms" trying to manipulate people/situations to position themselves to be the King or Queen. Throughout the years viewers have been able to watch the all the moves everyone makes to achieve the same goal. And now that the series is ending, it is fascinating to watch the final moves these characters pull to be on top at the very end.

Every process and plan has to have an "End Game" which is the final move(s) needed to be made. In Game of Thrones, this involves a lot of killing and deception. When talking about the Phoenix Suns, to me this is the cashing in of our assets. First though we must complete certain milestones and figure out some things. At this point I think there are certain questions that we must find the answers to:

-Who is more valuable between Chriss and Bender?

-Is Josh Jackson going to be a good player or actually Allstar caliber?

-How transcendent of a player will Devin Booker be?

-Is TJ Warren starter quality or simply a bench scorer?

-How valuable are the Miami picks?

-What value can we get out of Eric Bledsoe?

-Can #TheTimeline actually win games on their own?

-What value is there in keeping Alex Len?

As you can see there are a lot of unknowns. More than likely not all of these questions will have the great result we are looking for. That’s why it is so important for #TheTimeline to have a lot of playing time this year in order to provide some clarity. There have been and will be many ups and downs throughout this entire process. We can’t just develop these players and suck for the next 3 years though. Our youth has to be able to win games on their own. I expect a Year 4 Warren, Year 3 Booker and Year 2 Chriss, Bender, Ulis to show signs this coming season.

The question still remains when and what our "End Game" move will be. Regarding the "When", I think it is a lot closer than most people think. If you study the timelines of Golden State and OKC (as McD has said he did) you will notice a major jump in win totals during their processes.

When looking at OKC they went from a 23-59 team in 2008-09 to 50-32 the following season. This was due to the development of Kevin Durant and Russell Westbrook and addition of valuable rookie James Harden. So looking at the Suns I expect that jump to be either this season or next (most likely next). It shouldn’t take until Year 5-6 Devin Booker before we are a playoff team otherwise things went wrong. Yes guys I said it, the Phoenix Suns should be a playoff team by the 2018-2019 season!

Now regarding "what" our End Game move will be, this is where things get murky and interesting. There are many routes we can go in terms of what we give up and who we get. As of right now I think there could be a possible sequence of events that would be very beneficial to us.

Like in Game of Thrones, sometimes you must succeed off of other’s misfortunes. The New Orleans Pelicans might be that misfortune for the Phoenix Suns. They might have the biggest accumulation of raw talent on a team that is extremely mediocre that I can remember. There is definitely a chance that the pairing of Anthony Davis and Boogie blows up. Remember this is a last ditch effort by the Pelicans front office to keep AD satisfied by trying to win. If the experiment fails this season, I expect Boogie to bolt. That would leave the Pelicans in a very precarious position similar to the Sacramento Kings last year. I would expect AD to voice his displeasure and the Pelicans to trade him to start over and rebuild.

This is where we cash in our assets. If this implosion happened, it would be during the 2018-19 season or the summer after most likely. And like I said, I expect us to have made a jump by then if our development goes right. There is a good chance if we really combine our assets we could give them the best offer. McDonough has denied PG13, DMC, Butler, and Kyrie and there has to be a reason. I think that reason is he knows bigger fish are coming and is part of the reason he is keeping so much open cap space.

So in summary I just wanted to combine #TheTimeline, Game of Thrones, and what our possible End Game could be to have some fun and show everyone that we aren’t as far off as you may think. To make things a little clearer I made an "Ideal Timeline".

· The young core plays a lot of minutes and develops

· Add another piece to our core through the 2018 draft (Bagley, Ayton, Bamba)

· Figure out Warren’s worth

· Decide whether to keep or deal Bledsoe

This is clearly a hypothetical outline and many many things could change, go wrong, etc. It’s just an example to show that there is hope if our guys continue to improve and stay healthy. A lot rides on how good Booker, Jackson, Chriss, and Bender actually are. Like I said the jump could even be this year (doubt it but possible). The whole reason I wrote this was because the mojo around the site has been pretty negative (I don’t blame anyone because we have sucked). I hope this could brighten the mood a little bit and show that there is a tangible future and plan. It probably won’t involve Anthony Davis but the promise of our future is still there.

Do you believe in #TheTimeline?