As someone who speculates in stock options in my spare time, one of the most profitable tools I've learned is the ability to recognize when the market (or an individual stock) is bottoming. Even more important than that, however, is the ability to pinpoint when the bottom you've identified is actually the bottom, and not just temporary. This enables you to go all-in with that utmost confidence that you are about to experience a period of growth.

Most Phoenix Suns fans, myself included, have all too often fallen for the hope that things were about to get better, and that the Suns 9-year run of futility would soon be over. Is the Suns recent stretch of 5 wins in 7 games another case of fools gold, or have the Suns finally hit rock bottom and started the climb back to NBA relevance? The Christmas Eve bottoming of the US stock market shows some intriguing parallels to the Suns current situation. Let's see what, if anything, a stock market bottom can teach us about this possible Suns turning point.

The following is a daily chart of the S&P 500 Index as it bottomed, with notes relating to the Phoenix Suns recent bottom. 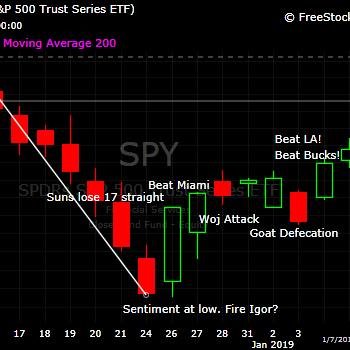 1) Suns lose 17 straight. One thing you can't see here is that as the S&P 500 was collapsing, the volume of shares traded was ridiculously high. This is common at market bottoms, sentiment is at a new low and everybody who's even thinking about selling dumps their shares. While the Suns were losing 17 games in a row, I saw sentiment fall on BSOTS lower than I can ever recall seeing it. Many readers were calling for coach Igor Kokoskov's head, culminating in a speculation by John Gambadoro that Kokoskov might be fired if the Suns losing streak grew to 18 games. Many longtime Suns fans also appeared in the comments wondering if this might be the end of their Suns fandom. A bottom is very likely when even the staunchest of longtime bulls finally give up and sell.

2) Suns beat the Heat on February 25. Ok, it was just one game, but it released a bit of the pressure on the Suns and caused an upward blip in the chart.

4) But then the Suns beat LA! Are we seeing signs of growth? Stock rising.

5) Unfortunately, that was followed up by another ESPN report, this one infamously including news of owner Robert Sarver and goat defecation. Stock falls again. How are we ever supposed to trust this thing?

6) Amazingly, the Suns then followed that up the very same night by rallying from 16 points down to beat the East leading Milwaukee Bucks. An expected loss in Portland failed to diminish the newfound hope and the very next night the Suns again rallied from 16 points down to win, this time a road game against the two-time defending champion Warriors.

There's the anatomy of a market bottom, and I've been applying it to rebuilding teams for awhile. But is this the bottom?

As a market remains in a long-term downtrend, the chart is a picture of periodic rising and falling, all within an overall downward trend. But the key point is that there are ups during a downtrend. There have been occasional ups in the Suns bear market as well. Earlier this year, we saw the Suns win 4 games in a row and 5 of 7. When looking at a stock or the market as a whole, I will not get all-in until I see a new upward spurt that goes higher than the most recent high of the downtrend. In other words, I would be willing to say that the Suns are embarking on a new uptrend if the Suns were to eclipse that streak from December.

I would say that they have. The Suns current 5 of 7 stretch is much more impressive than the one in December, as it includes 16-point comeback wins against the two best teams in the NBA, each of whom had played close games against us the last time we met, and should not have been overlooking us. It also feels more sustainable, as Tyler Johnson's addition has given us a reliable primary ballhandler and good defender, and Kelly Oubre has shown game-changing offensive and defensive ability. Perhaps most important, we've seen an engaged Deandre Ayton making crunch-time plays on both offense AND defense.

Throw in the fact that even in a season where the Suns were threatening their worst record ever, the Suns highs have been significantly higher than the past few years, and of course, their excellent play against the best teams in the NBA, and I am prepared to call the Suns bear market officially over.

Is the bottom in on the Phoenix Suns?