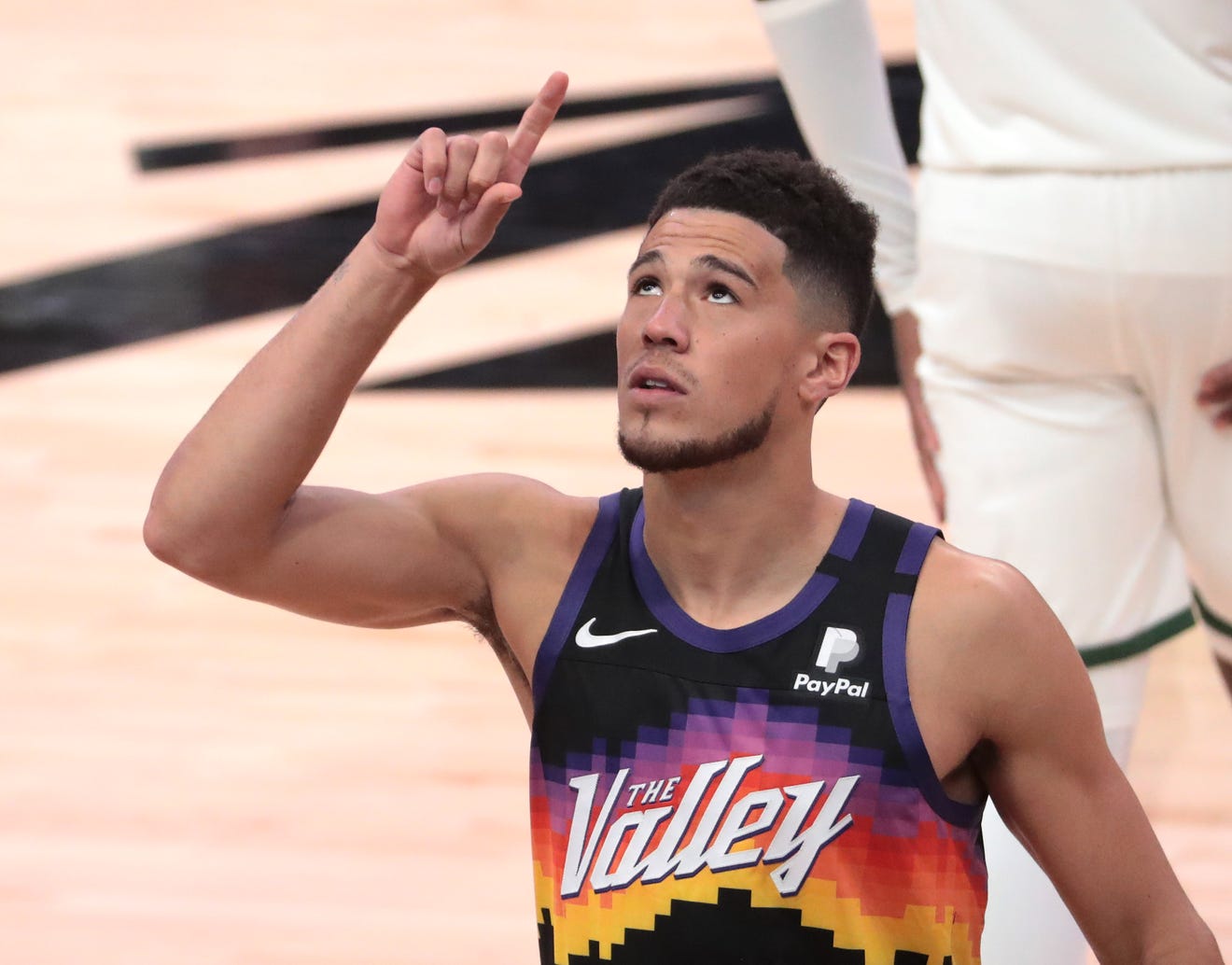 (all statistics via Basketball Reference and NBA.com)

"The fact of the matter is, is that, Devin Booker has not showed us that he's capable of winning games without Chris Paul yet, and this is his time to show us that he's capable of being not only a superstar in getting buckets , but being the leader of this team and keeping the boat afloat and going out there and leading his team to victories."

Among NBA media, Kendrick Perkins has been as staunch of a Suns supporter as anyone, but even that didn't prevent him from discounting Devin Booker's greatness in the aftermath of the Suns discovering Chris Paul will miss 6-8 weeks (hopefully less) with an avulsion fracture in his shooting thumb.

If one watches Devin Booker night to night and follows the team on a day to day basis, it is easy to see what he brings to a winning culture. Mature and poised beyond his years, upper echelon work ethic, a do anything-to-win mentality, and loyalty. He doesn't complain, and he never did, even when the Suns were a perennial 60+/- loss team and he had a new coach every season for the first 5 years of his career.

Throw in an owner who is usually discussed for the wrong reasons and weak crowds at home, how can one not admire Booker's commitment to the franchise?

This isn't a Kobe Bryant article, and many make the comparison between Bryant and Booker, but that's not what I am trying to do here.

Kobe Bryant, rest in peace, is one of the best players to ever play in the NBA. The Black Mamba, and absolute killer. A five time champion. A legend.

Devin Booker is not Kobe Bryant , but let's use Kobe for some context.

Despite winning 5 NBA titles, and obviously cementing himself as a top NBA player of all-time, did Kobe ever win without Shaquille O'Neal or Pau Gasol?

When Kobe did not have a premier sidekick (or when he was the premier sidekick) did anybody question if he was capable of being a superstar in getting buckets, but also being a leader of his team and leading his team to victories?

Not to say, there were not Kobe haters and plenty of slander, but history doesn't remember it that way.

Would Kobe have ever won a title without an elite teammate? The answer is likely no, because how many examples exist in NBA history where a solo superstar climbed the mountain top "alone"?

In fact, Kobe Bryant never proved he could be a superstar scorer and "win games", or at least meaningful games, by himself.

So again, the question is: Did Kobe prove he could be a superstar scorer while leading his team to victories?

I would say no, but does anyone today think he wasn't capable of doing so despite zero evidence to support that it's true.

It's fair to question if Devin Booker can win without Chris Paul. I would argue any star losing a running mate of Paul's caliber would struggle to maintain a similar winning pace.

Devin Booker only has one season to point to as potential evidence of "winning" without Chris Paul, and it is admittedly weak evidence.

We are all familiar with how the Suns performed in the bubble, with a memorable 8-0 run, falling just short of earning a playoff birth.The Suns had to win out to even have a chance, and they did just that.

In those 8 bubble games, with each one mounting in importance and pressure, Devin Booker demonstrated he was a force to be reckoned with when it mattered.

Again, not comparing directly to Kobe, but those are some Kobe-esque numbers from Booker. Factor in it was only Book's age 23 season and it makes his performance that much more impressive.

Note, when Kobe was 26-28 years old and in the dead middle of his hall of fame prime, he couldn't "win" meaningful games.

We all know how the playoffs ended for Devin Booker and the Suns, but let's examine how Booker performed overall.

Impressive, but to Kendrick Perkins point, he won those games with Chris Paul. Well, most of them.

In game 1 of the Western Conference Finals against the Los Angeles Clippers, Chris Paul was out of the lineup due to "testing positive" for COVID (I'll leave that alone). How did Booker do when it was time to prove he's a superstar scorer and can lead his team to victories?

Despite the Suns winning game 2, Booker wasn't nearly as impressive. He scored 20 points with 8 turnovers, but he still managed to be +4 in a 104-103 victory.

Let's not forget Devin broke his nose in three places in the third quarter off of Patrick Beverley's head, but he still gutted out the fourth quarter and helped the Suns win a game in which he largely struggled.

(Note: As far as evidence goes, Booker is 10-0 without Paul in "games that matter" - depending how you view the Bubble)

Let's not forget the opening series against the Lakers, in which the Suns took the series in 6 games .Chris Paul hurt his shooting shoulder, in the first half. He gutted it out for 36 minutes, but was a shell of himself and Monty Williams eventually pulled him entirely in the 4th quarter.

Though Booker wasn't "alone", Chris Paul didn't have a positive effect on over half the game, Booker still managed to score 34 points, 8 assists, and 7 rebounds en route to a 99-90 Suns victory.

In a close out game 6, after Chris Paul re-aggravated his shoulder injury in game 5, Booker came out and put on a memorable performance with Paul only playing 28 minutes and clearly hampered.

Booker played 46 minutes, willing the Suns to a 113-100 victory on the road to close out LeBron James and the Lakers with a remarkable 47 points, 11 rebounds, and 3 assists on 8 of 10 three point shooting.

Chris Paul played, but don't get it confused, Booker was the stick that stirred the drink.

There is a reason we watch the games. If you dive under the hood, Booker is doing winning things that don't show up in the common box score.

Here are some key Booker stats to note in a season in which the Suns are winning 80%+ of there games:

Another interesting statistic, is Booker's average shot distance is a career high 16.2 feet, his previous high was 15.1 feet in 2017-2018.This number is influenced by 17.7% of his shot attempts coming from between 16 feet and the 3 point line - the least efficient shot in basketball, but Devin has never been better, making 45.7% of them.

Also interesting, yet also very concerning, is Booker has never taken a less shots at the rim. He has always taken between 18-23% of his total shots at the rim, but this year it has absolutely plummeted to a career low of 10.4%.
Eye test, it's been clear Booker has been attacking the rim less, but I was surprised by the sharpness in the decline. I would like to hope the cause for this centers around Booker trying to preserve his body for another lengthy post season run. Attacking the rim requires additional wear and tear, ideally we see Booker ramp shots at the rim up in the post season, which will help his overall efficiency greatly.

The Phoenix Suns have a plethora of culture setters on their team, in large part the reason for their successes the last two seasons.

From the top down, James Jones, Monty Williams, Chris Paul, Jae Crowder, Mikal Bridges, Javale McGee; the list goes down to the bottom of the roster. Selfless guys who work hard and play the right way with a competitive mentality not many organizations can claim.

Booker was here before all of it. As I mentioned, Booker went through 5 head coaches, 58-63 losses a year for four consecutive years, sparse home crowds, failed lottery pick after lottery pick, and an unfavorable league perception. There wasn't much to appeal to Booker staying in Phoenix.

Now that the Suns are winning, and legitimate title contenders for the second year in a row, now the goal posts have been moved. Now, Booker is only winning because of Chris Paul. The three time all-star, perennial 25 point per game scorer is once again doubted.

Make no mistake, Chris Paul's impact is undeniable, but CP3 came to Phoenix BECAUSE of Devin Booker. One of the greatest point guards and basketball minds this league has seen bet on Devin Booker for the final chapters of his career, think about that.

The Suns have the 6th easiest schedule in basketball remaining based on opponent winning percentage - .486 (Tankathon). This bodes well for the Suns to maintain their 6.5 game lead in the Western Conference. By contrast, the Warriors have the 7th most difficult schedule remaining - .513.

With the Suns depth, the timely addition of Aaron Holiday, and the soon returns of both Landry Shamet and Cam Payne, the Suns are primed to "keep the boat afloat" during Chris Paul's thumb injury.

That boat will be captained by Devin Armani Booker, all the way to an All-NBA team and the ultimate goal of playing for another chance to win the NBA title.