Reminiscing about the Trade - ZonaFlash

Share All sharing options for: Reminiscing about the Trade - ZonaFlash

From Bright Side's own ZonaFlash

Reminiscing about the Trade

It was just 1 short year ago that I was stopping into a beachside internet cafe in Rio to check my mail, and cruise by Yahoo to see what was up with my ailing Suns. I was prepared for more of the same blah blah non-solutions that had frustrated me, many other fans and of course the players themselves.

And then! I saw! I couldn't believe it! The Suns once again recaptured my imagination with the trade for Shaq. At first I was befuddled. It looked so much like a loser Cardinals move. This past season aside, the Cardinals are synonymous with losing and are best known for bringing in big names well past their prime. I thought, uh-oh, the return of Emmitt Smith!

I bought the Suns 3-day media spin and was a believer ever since. He could get better! It could work! The trainers felt they could help him. D'Antoni thought he could be integrated into the offense. Shaq was willing to give it a shot.

Now, the trade looks pretty good with Shaq a legitimate All-Star and Marion grassing around in loservilles of bottom-feeding Toronto and Miami. However, I was fully willing to accept the opposite outcome.

I hate complacency most of all, and I respect the Suns management for aggressively trying to get better. I'm accustomed to the Suns making swashbuckling trades since they shipped out Larry Nance for pocket lint that turned into pound of gold.

It's been one year since Shaq arrived and, you know, on the court we're not necessarily better. I think it would be hard to say we're much worse. We are different and with that there's hope. Handling the offense is going to take a lot of experimentation, as it has. Imagine moving in a new giant full-sized sectional into your living room. You're gonna have to find the best way to fit it in. Same thing with Shaq in the paint!

I couldn't imagine another year of undersized underdog heroics trying to get us to the promised land, especially not with the bitching going on and the external pressure from the national media trying to pop the team like a big fat zit. I don't fully blame Marion for being the pissy locker-room cancer he was, I do blame him for being poisoned by his smarmy agent Dan Fegan and for considering losing a viable option to forward his selfish interests.

Shaq vs. Marion (in brief)

Shaq himself has worked hard and you must give him an A+ for effort. His physicality is improved. His return has meant a quantum leap for NBA sports training knowledge. He's playing energetically and was a legitimate All-star this year. He's even improved his free-throw shooting by 10-12 points. We couldn't have asked for anything more from him.

Marion on the other hand continues to underwhelm. You think Shaq complains about touches, what about Shawn Marion? I do miss Marion's ability defend in the clutch. I miss Marion's dunk-faces and I miss Kenny Smith's Matrix soundtrack. I don't miss his 3-point shooting. 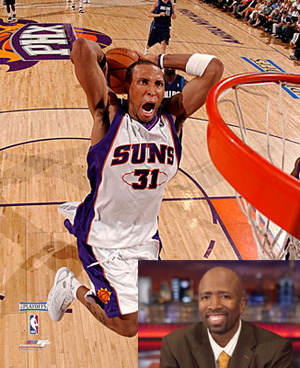 How about the positive energy Shaq brings?

Off the court, it's been a damn happy year with Shaq. The guy has made me laugh. He's brightened up what otherwise would have a been a dreary year.

How about his first dive into the stands? That is a fan-moment for life! It showed me he was going to try. 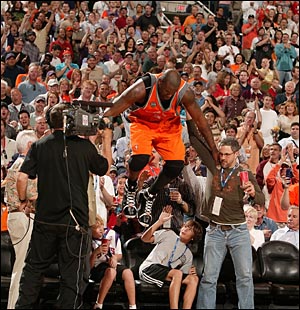 Shaq has brought Twitter into the public consciousness. I remember where I was when he free-styled "Kobe how does my ass taste." I love when he knocks players to the deck and treats 7-foot NBA giants like big sissies. I love his quotatiousness and willingness to talk smack.

He's been great with the fans and you get a sense that he really likes them. His ride in the Honda and his impromptu meal with two fans at a 5 and Diner is something very special.

If we are marked to lose, why not drop a few players to the deck and instead have the funnest player in the NBA?

One view is that the Suns are not winning more, the trade adds significantly to the financial burden in 2009-2010, so the trade was a disaster.

If you think the game is just about winning, you better check yourself. On the business side, its bad business because only 1 team wins each year. You can play that hard-line, and winning does cover over a multitude of sins (see Kobe), but you are denying yourself of joy in sports if you make this the only thing.

Alternatively, consider this. If you think winning is all there is, why would you want a player like Marion who seemed quite okay losing and being traded to losing teams for his own selfish reasons?